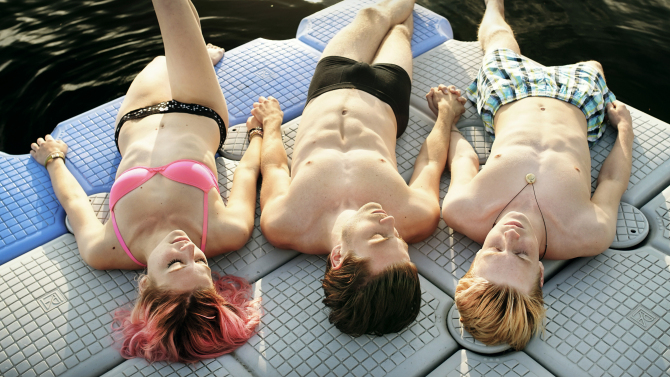 Centre of My World | Movie review

2017 saw Germany legalise gay marriage with a minimum of fuss (in the end, anyway). 2017 also sees the international rollout of the German film Centre of My World (Die Mitte der Welt), in which a gay love story is handled with a refreshing minimum of fuss. Phil (Louis Hofmann) meets Nicholas (Jannik Schümann), the new boy at school, and their mutual desire is acknowledged and quickly acted upon with an admirable lack of angst. The conflict in the tale is more due to Phil’s outsider status and a yearning to find his place in the world. This sense of being on the periphery is less concerned with sexual orientation and is more driven by the eccentricity of his family, the growing emotional distance between his mother and his sister, and his absent father. Phil’s sexuality is largely inconsequential, though is depicted with an abundance of naked, sweaty flesh, which is interesting given the younger audience who might seek out the movie after reading the popular German young adult novel upon which it’s based. The urgency of the lust between Phil and Nicholas would presumably have been watered down if this was an American movie.

Director Jakob M Erwa displays the gentle unfolding of the narrative in a soft, almost desaturated light, and gently unfold it does. The straightforward nature of the film (although this is not a negative trait) ambles along, aided by helpful visual inserts and a sparingly used voiceover from Phil. The late summer setting of the story is depicted in a deceptively carefree manner as the protagonist becomes increasingly enamoured with Nicholas while trying decide just what is in fact… um… the centre of his world.

The young cast weightlessly carry the unremarkable though still amiably satisfying narrative to an appropriate climax, with the adults of the piece looming as needed, without actually seeming to influence events all that much. It’s largely Phil’s story, and Hofmann plays him with a rather lovely delicacy of spirit, which contrasts nicely with the enigmatic qualities of Schümann’s Nicholas. Centre of My World is a sweetly mellow charmer.

Centre of My World is released nationwide on 15th September 2017.

Watch the trailer for Centre of My World here: