The Killing of a Sacred Deer: An interview with Barry Keoghan 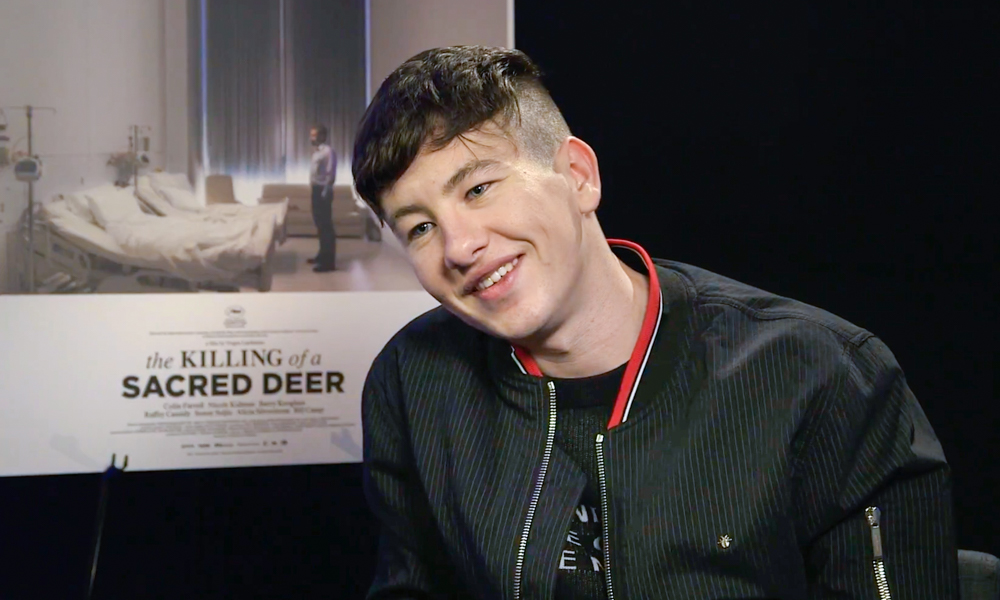 The Killing of a Sacred Deer: An interview with Barry Keoghan

The Killing of a Sacred Deer is the unsettling new thriller from the director of dark satire The Lobster, Yorgos Lanthimos. Once again collaborating with Colin Farrell, this film starts from the premise of a Greek metaphor about justice. The scene is set with the ostensibly peaceful suburban existence of a cardiologist Steven (Farrell), his ophthalmologist wife (Nicole Kidman) and their two young children Kim and Bob. However, that peace is disturbed once a strange young boy, Martin (Barry Keoghan), starts to insinuate himself into their lives. Blacker than night and perfectly orchestrated in its deadpan performances from an unbeatable cast, Lanthimos once again delivers a painfully sinister-yet-hilarious critique of contemporary middle-class living.

We spoke with up-and-coming, talented actor Barry Keoghan about the boundaries he had to push to take on this role, how it felt sharing the set with two of the most revered Hollywood actors, and what’s next for him.

What was about this film that made you want to get involved with it?

Yell, Yorgos. I’ve seen the Lobster and Dogtooth and I thought: “These are weird movies, weird but good, so unique. I want to work with him.” When the opportunity came, I was like, “there we go.” Then I read the script and I said: “God this character. He’s one I could play around with.”

You had to go to some pretty dark places with this character, and overall deadpan approach to the entire film. How you go about preparing this character?

Yorgos never asked for [it to be] deadpan, that’s his language, you have that going in because you watched The Lobster and you watched Dogtooth and you realise that this is the rhythm they are speaking so I just went in and try not to act because he pulls you on acting. He’s like:”Just say the lines.” It’s more of a bigger impact when you say the lines.

And what was it like working with Nicole Kidman and Colin Farrell?

They were great. They were like a mother and father on set, they were cool. Nicole, look at the career she’s had, and she still wants to make great movies at this stage and also work with cutting-edge filmmakers. When you see someone of that calibre able to do that, it pushes you as a young actor to be surrounded with people like Nicole or Colin who would make really really good choices. It makes me really appreciate what I do and have respect for it, so yeah I´m happy to see her do well and I’m excited to see what she does next.

Did you have a special bond with Colin, because you are both Irish?

It is a thing yes! He comes from like ten minutes down the road from me.

Yes, he grew up from ten minutes down the road from me. There’s definitely that thing, the Dublin thing and the Irish thing. He looked out for me a lot.

It was interesting to see him in a non-alpha-male role.

Yes! And the choices he’s making as well, he’s back on the map now he’s really making really good choices.

How was working with Raffey Cassidy, you had a great chemistry, even though your character is very different from this innocent-seeming girl.

She’s cool, I mean, she’s so talented. There’s a lot of scenes where Raffey and I just joked around. There was no awkwardness, none of that.

Did you have a good atmosphere on set considering the tone of the film?

That’s the thing. It’s such a dark film but on set everyone had a laugh, there was no intensity. A very enjoyable movie to film. A lot of the time I had to keep a straight face and I just kept laughing, especially in the part where I ask Colin “can I see your chest” and I’m just there looking.

It´s just so weird, trying to keep a straight face was tough. But the lemonade scene, you know, it’s really nice the lemonade [laughs] It’s just like [laughs] I don’t know it’s weird. But yeah those are all laughs on set. And the kid falling off the bed. There is a lot of good comedy in there. It’s the same with The Lobster. I think it’s because it’s all deadpan and we reserve a lot of things, we don’t say a lot of things that we feel in day-to-day and with Yorgos it’s just “pay no mind, just say it”.

Do you consider yourself a method actors? Did you try and stay in the character?

This is the only film [in which] that didn’t happen, because, he doesn’t like that apporach, Yorgos, he doesn’t like having a backstory, perceive feelings and set in your emotion for the day. He just want you to drive everything away, so that was nice.

Is there an actor that you look to for inspiration?

Leonardo DiCaprio. Because, in his early career as well, he just transformed into these characters, like What’s Eating Gilbert Grape and The Basketball Diaries. His career is the one I’d like to follow.

Here’s never a side character.

Yes, and he engages you. It could be a scene of him just walking around the room. In every scene he gets you engaged 24/7. That’s an amazing skill, being able to engage [the audience] every time.

The whole thing is a bit of a metaphor – The Killing of a Sacred Deer, there’s a metaphor there – but the film itself is also about this strange suburbia, in some way specific to the US but also universal. What do you think that’s all about, what is he trying to tell us? A comment on contemporary life?

Yeah that’s what he does, he’s challenging everyone. The Americans. There are a lot of layers there and a lot of questions. That’s why some people feel like “what the f*** was that?” My american agency, they wouldn´t talk to me for a day as well – it´s not their kind of film. They felt a little challenged but that’s what I love you know. I love that people have a different take on it so. Yorgos, even with The Lobster, he shown we all feel that we have to meet someone [with something] in common, and that’s the way we should live. Get married and bla bla bla. like. There’s so many things to his movies.

How have you felt the reception was so far and how do you think it’s going to play out?

The London Film Festival premiere, which had a kind of general public, went good. I think people these days are up for movies like this. I certainly don’t like the whole happy ending movies, I’m not a fan of those type of movies, where you know absolutely everything about it when you walk out. I love these kind of movies where I’m a bit challenged and a bit uncomfortable. I think a younger crowd will definitely take this.

There’s a lot of movies now trying different things adn those are the ones I want to be a part of. Like Victoria, have you seen Victoria? It´s all in one shot, it’s done in one take. It’s so good. It’s films like that interest me. Anyway next stop for the Deer is in Ireland. I’m curious to see how it does in Ireland. If it does well here I’m sure it will do well in Ireland.

Is it hard to go back to your normal life afterwards?

It’s a business so I do that and then I go home to my real life. It’s been craft as well but it’s also business.

How does big sets like Dunkirk‘s compare to the Deer‘s, which is much smaller, mostly based in a hospital, for you as an actor? What do you prefer?

With every film you’re going into a world. This might make me sound very arty but, you go into Chris Nolan, you go into that world that was in Dunkirk. He had the planes on the set and whatever. This film didn’t need any of that, this film needed a hospital. They are two worlds, I’ve never compared the sets but coming from Dunkirk to this was a bit…in the space of… actually I was still on Dunkirk went I went to this. It was my idea but so good to go from that to that. We did the premiere of Dunkirk in Leicester Square too, it was nice to be back for a different film.

Were there any scenes particularly challenging to film? I don’t want to give spoilers.

That whole sequence at the end in the basement is a bit draining you know. I was tied in a chair and they wouldn’t let me out sometimes. That got physically tiring.

When you actually saw the film, were you surprised by the final result? The music?

I was very proud. The music is so loud, on purpose I think. I was very proud of it, I really mean that, I’m not proud of all my movies but this one… I respected Yorgos ten times more, just the way he put it together.

What’s going to be next?

Next? We’ll see. I’ve got a few offers but I have to be patient. After Chris Nolan and Yorgos, how to top that? Scorsese probably (laughs), gimme a shout.

The Killing of a Sacred Deer is released nationwide on 3rd November 2017. Read our review here.

Watch the trailer for The Killing of a Sacred here:

★★★★★
Dan Meier
Read More
Scroll for more
Tap
Ferrari Race to Immortality premiere: A chat on the red carpet with Daryl Goodrich, Louise King, Natalie Pinkham and the Duke of Richmond
The Killing of a Sacred Deer: An interview with director Yorgos Lanthimos