The Jungle at the Young Vic 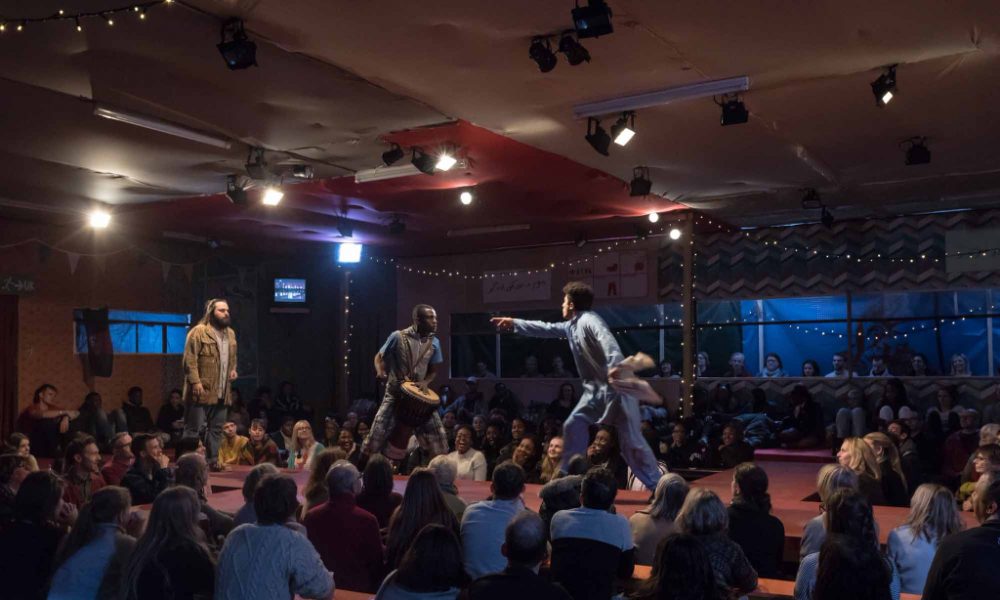 The Jungle at the Young Vic | Theatre review

Having spent some time in the former settlement in Calais known as the Jungle, this reviewer felt much anticipation about what the Young Vic’s reproduction of life there was going to be like. The theatre space has been transformed into the “Afghan Café”, with areas that are named after different countries, whose people have been driven – often many thousands of miles – to Calais. The piece’s narrator, Safi (Ammar Haj Hahmad), says at one point that the Afghan Café is actually many restaurants. In this way, it serves as a lens through which the whole settlement – the humanitarian crisis of its existence, the shared experiences, and horrific commonalities between the refugees, whatever their nationality – could be viewed

Miriam Buether’s set looks just like one of the bigger indoor spaces at the actual Calais camp. The kitchen perfectly portrays the shops that were dotted around and the materials of the building are exactly the same, as is the manner of their construction. The attention to detail also enables the spectator to be fully immersed in the events that are retold. For example, half-full ketchup bottles sit on tables, “the best bread in whole of France” is handed out and, at times, restaurant owner Salar (Ben Turner) actually gives one or two audience members a meal. The characters, too, are utterly real. Before the play begins, Salar and Maz (Elham Ehsa) pace around the “stage”, remonstrating on the phone – a common sight in the Jungle as everyone had people they had left behind and were trying to arrange a safe place for them to reach.

The Jungle tells the story of the camp, from its inception on a torch-lit night, all the way through to its complete destruction six weeks after the successful but peaceful resistance of the bulldozing of the Afghan Café, the last structure in the south part of the settlement since all others had been physically moved to within the “safe zone”. What Joe Murphy and Joe Robertson’s play really shows is how the awful situation of dispossession, flight and rejection brought many thousands of people from many different countries together and created a small new country of its own. Safi asks at one point, “When does a place become a place? […] When does a place become a home?”.

Beyond the physical, the thematic verisimilitude is equally astounding. Extant issues have been carefully translated into the theatre setting, both positive and negative. The conflicts, the problems, the worries, hopes, relationships and conditions are all portrayed in a steep and unforgiving but incredibly illuminating learning curve. The piece shows with complete honesty what refugees have to put up with – at home, on the road and at their unwanted destination. However, it is not all doom and gloom; there is much room for hope, joy, community and laughter. Indeed, there are many hilarious moments, beautiful music and dancing, poignant acts of tenderness and rousing victories.

Whilst those watching are fully immersed, the performance style demonstrates a riveting balance of the traditional audience-actor divide and a more interactive, boundary-dissolving approach. This is afforded by the set, as spectators are the customers in the restaurant, events taking place around them with occasional interaction between theatregoers and the cast. Another line that is blurred is that between actor and character, and it becomes progressively more difficult to tell who is or is not a refugee-turned-actor. All the performers make the delivery of this incredibly genuine, uncontrived script so uncompromisingly real and immediately, totally convincing.

The most powerful scene is perhaps Okot’s (John Pfumojena) soliloquy, in which he imparts a stunning insight into the actuality of the horrors that happened to the refugees, time and time again. The Jungle is not just a play, but an absolutely vital attempt to raise awareness and bring the tragedy of unwanted and abandoned refugees (thousands of whom are still stranded on the border even after the Jungle has been replaced by a huge field of rapeseed) to the attention of the world.

The Jungle is at the Young Vic from 7th December 2017 until 9th January 2018. For further information or to book visit the theatre’s website here. 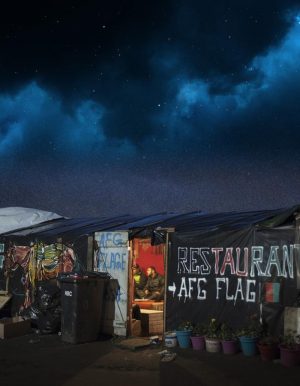