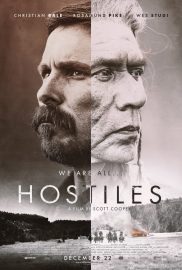 By modern standards, the serious Western is a rarity. The old Westerns of the 50s and before are wrapped in fantasy, Leone made them stylish, and Corbucci liked to tell jokes and tear limbs off. But with Hostiles, writer-director Scott Cooper has taken on the challenge of a “serious” Western.

It’s 1892, soon after the Apache Wars between White “Americans” and Native Americans. Captain Joseph Blocker (Christian Bale) is assigned the task of escorting Chief Yellow Hawk (Wes Studi) and his family to their homeland in the Valley of the Bears in Montana.

The first ten minutes sets off warning bells: a group of Comanches murdering and mutilating a peaceful white family, leaving the mother, Rosalee Quaid (Rosamund Pike), with the brutal deaths of her husband and children. We wonder whether Scott Cooper is adopting a pro-colonial mentality, but as the film continues we come to realise that everyone has blood on their hands. There is brutality throughout, but it’s never funny or overused. Movie-blood is often darker depending on the solemnity of the picture – in Hostiles, the blood is pitch-black.

The feature carries a political motive: the deep American guilt (or lack thereof) of their violent colonial history. Even after hundreds of years that painful tension is still there. Although this is integral, the film is more of an existential road-trip with traumatised soldiers from both sides, as well as Rosalee Quaid, all trying to live through the horrors they’ve endured. Each scene has its own special weight between the characters, and the bleak and beautiful cinematography from Masanobu Takayanagi captures its dark, natural tone.

Christian Bale delivers a blunt performance as Captain Blocker, appearing like a modernised John Wayne – only far less heroic and much more empathetic. But all the acting praise has to be awarded to Rosamund Pike, who delivers a spirit-shattering portrayal of a mother in mourning. She creates a painful realism, traumatic for the audience to witness – knocking Claudia Cardinale’s character in Once Upon a Time in the West back into the realms of fantasy.

With war-torn characters worthy of Kubrick and sombre dialogue worthy of Kierkegaard (“I sometimes envy the finality of death – the certainty”), Cooper has created a black, revisionist Western that fractures the soul. This is the sort of Western that blessed the dark screens of 70s Hollywood – an abyss that deserves to be welcomed.

Watch the trailer for Hostiles here: