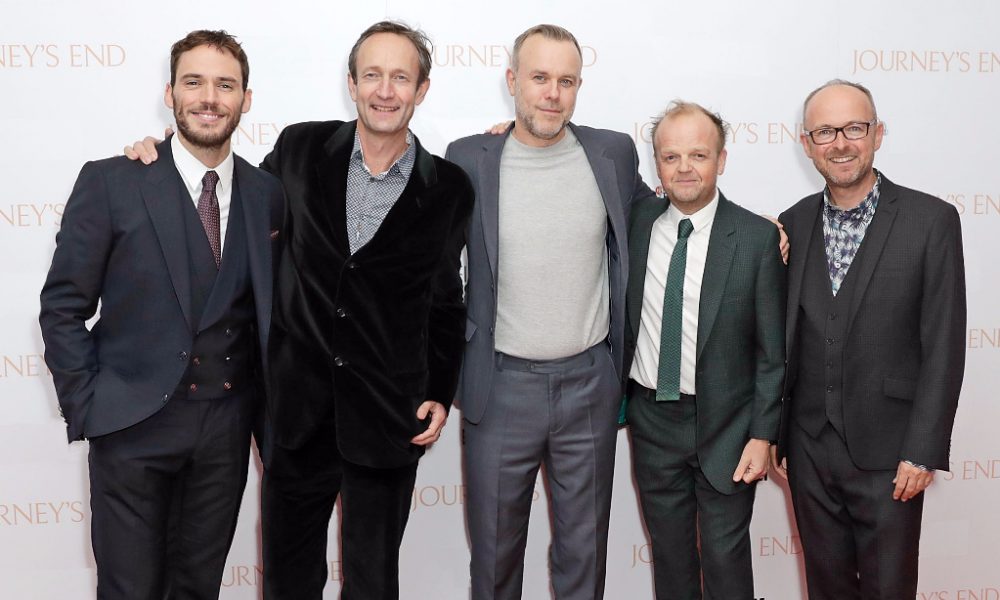 At the start of 2018, nearly 100 years since the end of the First World War, director Saul Dibb will plunge us deep into the heart of the trenches. Moving away from conventional war films, Journey’s End will serve as a more real, human look at the soldiers who fought and died during that harrowing time.

A Q&A session for the film was held at the Vue Cinema in Leicester Square with Saul Dibb as well as cast members Asa Butterfield, Paul Bettany, Toby Jones, and Stephen Graham. The Upcoming attended to find out the cast’s reaction to the film, how the actors transitioned into their roles, and portraying PTSD on screen.

Stephen [Graham]. I know this is your first time seeing the film. How did you feel about it?

Stephen Graham: It was heavy. I thought it really captured the intensity of the trenches. The music was harrowing. The tension of it and the intimacy of the characters… The different ways that people deal with the circumstances and get to look at Post-Traumatic Stress Disorder through different people. Yeah, it was a hell of a film.

How easy was it to find the perfect way to finish the film?

Saul Dibb: The thing about the end is it gave us such a clear route of where to begin and the tone to set for the rest of the film. What [screenwriter] Simon Reade did brilliantly was set very clearly at the start that these were 120 dead men walking. The end is inevitable. We weren’t dealing with if, we were dealing with when. You get this sense of the pressure the soldiers were under, waiting for this inevitable climax. It’s about that pressure of waiting and the psychological impact on all of the people that we get to know in the course of the film. That’s what the film’s about.

Paul [Bettany], you said you felt a real bond with the character of Osbourne, he was like a family member. Can you explain a bit more about that connection you had with the role?

Paul Bettany: I based him on my Uncle Theo, who was an army man and with whom I had nothing in common with politically but loved very deeply. He represented everything that’s good about being British, the stiff upper-lip. He always looked after me in a way that’s unsentimental and practical.

SG: I didn’t know that Paul based his character on his uncle, because I also based my character on one of my uncles. My Uncle Eddy. He’s a lorry driver. He’s got this beautiful outlook on life. He made you feel good. He always had this way about him, which pulled you away from what was really going on. It was a beautiful experience, this film. I don’t mean to be pretentious, but as a group we felt like we were really together. We always had each other’s back and looked after each other. And that all came from Saul.

It’s your second time working with Laurie [Rose, cinematographer], what are the strengths that he brings?

SD: I don’t need to say what a brilliant eye he’s got. He’s able to work with available light and shoot just using candles in the dugout. There was not a lighting stand around. It’s the technical things that he’s brilliant at, but it’s also in how he is as a person. What’s most important is the performances from the actors and we wanted to make that as intimate and real and powerful as possible. We were able to create a really warm and generous spirit on set and Laurie does that too. We’re all able to have discussions. It’s a cliché, but there’s no such thing as a bad idea. If somebody makes a suggestion and you’re able to go with it or discuss it or feel open, I find that’s a much better way to work. I think that’s how we were able to get such an intimate film. It’s not just about his abilities with the camera – it’s how he interacts with people, how we work out the blocking, how we think of different ways to try and shoot the scene. It would be a discussion amongst all of us. We would all have ideas and chip in. It adds so much extra.

Have any of you met any veterans with PTSD?

PB: We had an amazing day with some men who served in various wars and of various ages. It was moving and surprising and they were incredibly generous. Talking with them about the script, it was very resonant for them. There’s some really modern ideas – it’s not a three-act structure, there’s a lot of talk about food and not much talk about war. That resonated for them. It was the most important day for me. Have they seen it?

SD: Not yet, but we really want them to see it. This is a film set almost exactly 100 years ago but their experiences of war, the things that they talk about, they deflect everything into humour. There’s an enormous emotional impact that is buried within them and was buried within them for a long, long time and came out in ways that started to prove dysfunctional for them, and relationships broke down. That gave us all a real insight. We were making a timeless piece about people under extreme circumstances and there’s a tenderness between men that you don’t expect.

Was there a boot camp of sorts for the actors in pre-production?

AB: I remember the first day of rehearsals down in Ipswich, with the trenches. We were marching around in uniform with our Lee-Enfields and getting to grips with the mud. That was the first day we all met each other.

Can I go back to the music, because it was quite an unusual choice for a film set in the First World War. What made you decide on that particular composer?

SD: What I wanted was something that was unusual, that didn’t feel like school, and that would carry through a sense of dread right from the start. [Hildur Guðnadóttir] is an Icelandic experimental cellist, who does this extraordinary haunting music and I fell in love with it. I persuaded the producers to license her tracks. None of it was scored for the film. It was quite liberating, not going to someone and asking them to score it. Her music is so unique and adds so much to the film.

Considering what the characters would’ve gone through emotionally, what did you do in order to relate and understand what they were dealing with?

Toby Jones: Of course, you can’t really. It is an imaginative act. With war films, it’s so alien to us who make them. War is so hard to imagine. It takes a brilliant dramatist to resolve the bridge in experience. It’s one of the hardest things to imagine, being in war. The brilliance of [RC] Sheriff’s play is the fact that it’s brought down to a very everyday, humdrum, domestic activity that you can imagine. When you work in any war film, there’s always that fear that you might cheapen it or sentimentalise it or find something that isn’t analogous with it. I suppose that’s your job as an actor, to try and get somewhere near it. But you’re helped enormously by a good dramatist, who manages to displace the general emotion into specific, concrete activity.

SG: You put yourself into it as much as you can. But I think one of the great characters of this film is Time. Time itself is an amazing character. There’s a beautiful scene between [Paul Bettany and Asa Butterfield] where we see time moving as they’re getting ready to go. That’s something really poignant about that and it really touched me. I think that was a great piece of dramatisation, Time as a major character.