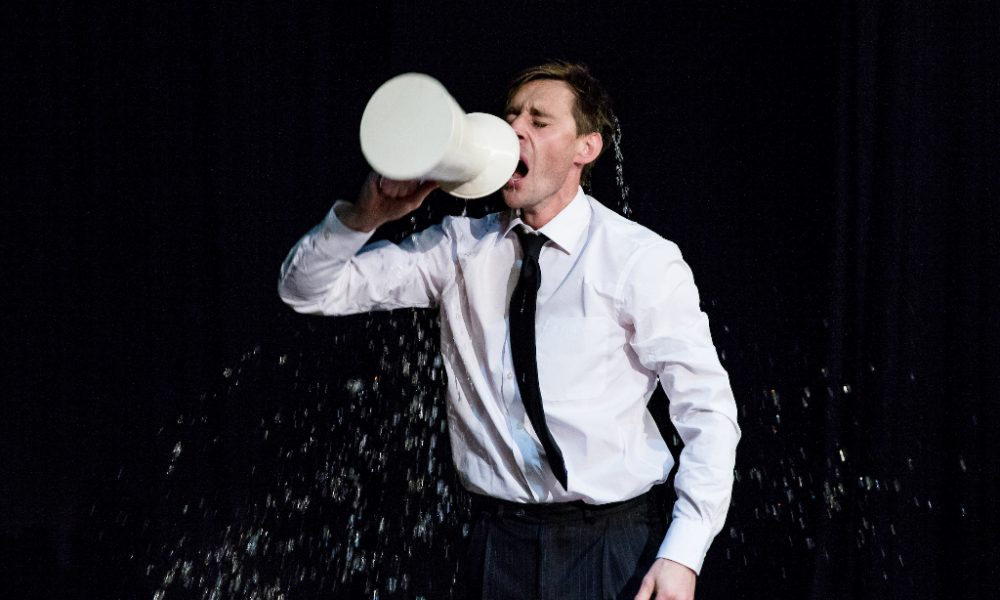 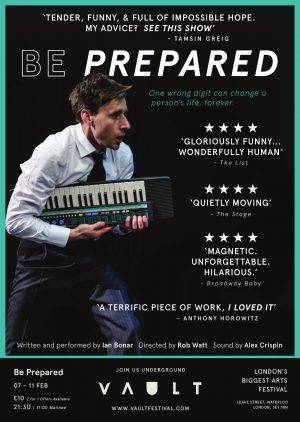 Be Prepared is a minimalistic, immersive one-man show about death. Tom (Ian Bonar) wanders onto the stage without the audience realising the play has begun. He’s nervous, having attended the funeral of a man he never really met, and he gabbles to the room, laughing nervously and revealing that his own father recently died and he hasn’t been coping well. Tom receives a call from an old man called Mr Chambers who, believing him to be the funeral directors, tells Tom his wife rolled off a cliff. Through a series of flashbacks, conversations with the audience, physical theatre, impersonations and (badly) sung songs, we are given a glimpse into the lives of these two men and the grief that connects them.

The stage is sparse, only containing a wooden table, a vase of white flowers and a red book. Deep, vibrating sounds are used intimately, adding to the disjointed, confused nature of the story. The lighting arrangement is simple but used very effectively during a war scene when a red haze accompanies the violent flashback.

Ian Bonar is a talented actor who can completely change tone in nano seconds and his performance of a nervous character who is clearly on the edge of a meltdown is believable. His impressions of Mr Chambers are subtle but plausible. The script, which is laden heavily with death and grief, is full of striking, often distressing image; “Sounds like marbles, rolling around in his throat” is used to describe a corpse that appears to still be breathing.

Though the piece rouches on death, grief, dementia and violence, it is also hilarious at times. Tom’s description of his dead father resembling ET is particularly memorable. The description of the funeral home, where he picks out a “mid-range classic coffin” from a woman who “looks like the Disney version of the Hunchback of Notre Dame”, is striking in its relatable social awkwardness. Bonar’s way of portraying grief, not shying away from the realities of not being able to wash, to go back to real life, the sorrow of not being able to remember what a loved one smelled like, is subtly powerful. The play can feel awkward and uncomfortable at times, but that is the intention.

Be Prepared is a strange, unsettling, disjointed story that touches on some very heavy themes. It is not a show for people who like clearly ordered structure or are looking to be uplifted, but it is well executed, well written and insidiously memorable.

Be Prepared is at Vault Festival 2018 from 7th until 11th February 2018. For further information or to book visit the festival website here.

Read our interview with actor and writer Ian Bonar here.