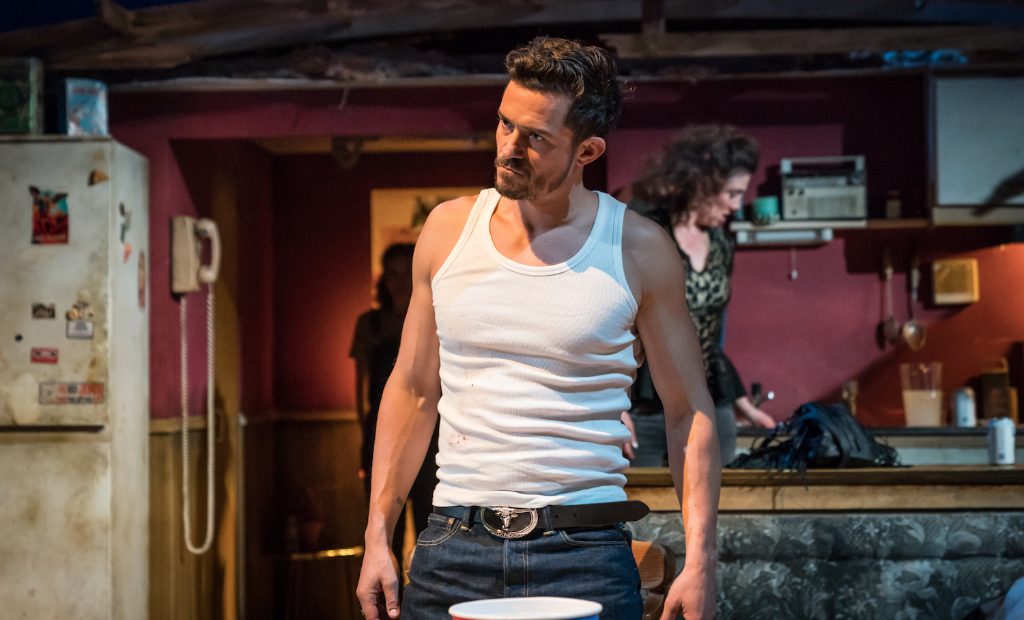 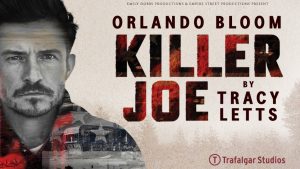 Killer Joe has courted controversy since news of its revival at Trafalgar Studios. The very first play of much-since lauded American playwright Tracy Letts, it’s confronting, violent and loaded with the sexual humiliation of women and “trailer trash” cliché. Is all this awfulness making a point? And is Letts, a male, the authentic voice to make it? Operating right in London’s tourist epicentre and featuring Orlando Bloom as the titular Joe, it’s not a production that’s easy to ignore. And the storyline and performances are engrossing enough that you do hang on to see if the violence is justified, hoping that it is.

In Southern America, a poor son arranges a hit on his mother, becoming embroiled in a hitman debacle that teeters on the edge of farce. The drama’s three (seen and unseen) women are inferior in intellect, morality or status, and all are played like pawns by the men. There’s Adele, the unseen mother whom Ansel and Chris want murdered. While she’s the target, her daughter Dottie is the prize, her body offered as a “retainer” to the villainous hitman Joe. When her father’s girlfriend Sharla (the embodiment of the “Eve” trope) is punished, it’s through sexual humiliation. For the men, sex and murder are the very languages they speak: they pay for it, negotiate it and carry it out, while their female counterparts are the passive receivers of all these things.

While the women are victims, the three men are villains and idiots. The only redeeming feature seems to be Chris’s love for his sister Dottie, and even that reveals itself to be possessive and inappropriate. To love somebody, no matter how fiercely, is not the same as affording them a level footing. Another unsettling concept is that of woman-as-object being learnt at home. Dottie’s virginity is used as a bargaining chip by her father and brother; still sadder is the fact that this kind of transaction will surely become reinforced as she negotiates life as a woman.

So far, the women have little agency to elevate them from victimhood. But then – after a bizarre but rather pleasingly giddy bit where the characters chase one another around like a blood-splattered Benny Hill skit – the dynamics shift. Dottie finally takes control and makes a gut decision which makes the audience reassess everything that’s been going on in her head until now, even though we’ve had hints of her intuition all along. Up to that moment, it’s the men who have been free to mess up and the women who’ve had to pay. It’s been the women whose lives and bodies have been coldly assessed for worth; now it’s the men who are judged on what they are worth to Dottie. Just like every other character, she is making her bid for a better life.

There’s no getting away from the fact that female nudity abounds in this play. And while Dottie (and, of course, the actress Sophie Cookson) is excruciatingly forced to strip naked by Joe, we get no more than a cheeky flash of bum from Bloom. Joe turns away from Dottie while commanding she remove her underwear, making it clear it’s as much about power as voyeurism, but that doesn’t change the fact that Dottie is square-on to an audience who can see every inch of her bare flesh. Is the onslaught of gender degradation justified by a two-minute turn of events at the play’s end?

Grace Smart’s trailer set is a detailed study of the drudgery of poverty. Richard Howell’s lighting brings occasional stunning tableaux to the dirty space, with green and red picking out the characters’ faces like 3D-cinema glasses.

Occasionally the production is in overkill. Brother Chris, played by Adam Gillen, is arresting but borders on the pantomimic. That’s a feeling echoed by the deafening, foreboding claps of thunder. In the second act, a steady soundtrack of “tense” music seems tautological.

Killer Joe makes for a thrilling couple of hours, it’s true. Letts’s script has some provocative ideas about gender dynamics that allow for meaty discourse. But in an ever more enlightened and inclusive day, its male gaze and glut of violence against women cannot expect to go unscrutinised.

Killer Joe is at Trafalgar Studios from 18th May until 18th August 2018. For further information or to book visit the theatre’s website here.