Camden Fringe 2018: Did it Hurt? at Camden People’s Theatre 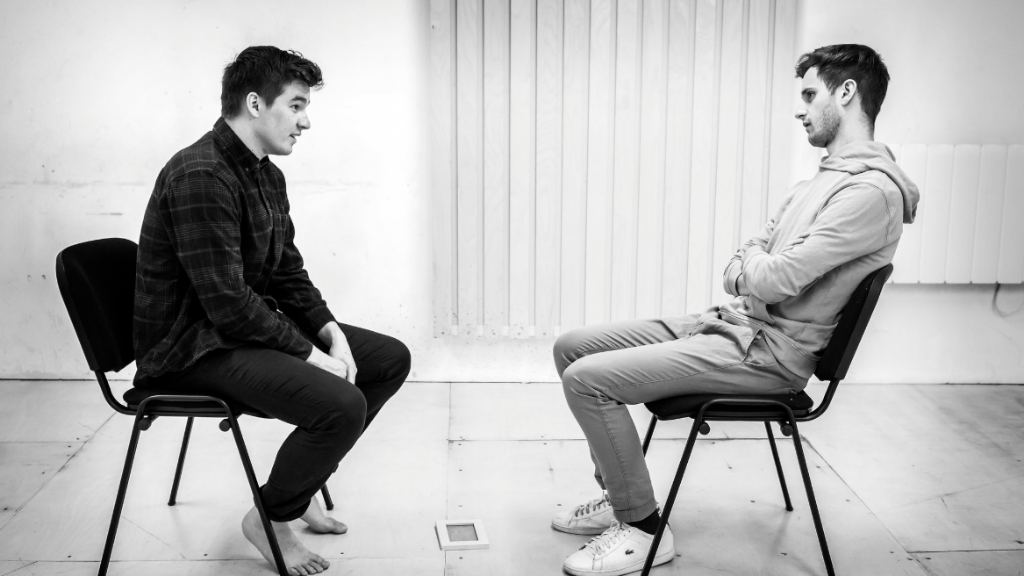 Michael Faulkner and Joshua Poole are the duo behind and in front of Did It Hurt? This is their debut work under the banner of their independently formed production company Seventy30. In their own words, the show is “a dangerous commentary on the toxic nature of the male psyche.” It’s both an accurate representation and sharp deconstruction of masculinity and related issues including emotional suppression and depression.

The play begins with classic set-up of two people in a room with no way out after one of them accidentally fully closes the exit door. Apocalyptic ambient noise makes it sound as if they’re trapped but the further we get into their deep discussion, the more we learn about their reasons for being there, which are less to do with hiding from a global disaster but rather running away from an internal one.

Both performers aim to make their points by embodying extreme archetypes of the British social class – Jean (Poole) is the toff and Paul (Faulkner) is the chav. The former captures optimal pompousness for his role whereas the latter is less convincing as a lout but, fortunately, his character works better as a more nuanced depiction of a working-class male – certainly one that rings true to life.

The men’s enormously different backgrounds are cause for attitudinal conflict. Naturally, humour arises from the odd pairing and their extensive conversation that covers a broad range of topics including education, women and suicide. An exchange where Paul challenges Jean to name five rappers, following his own cathartic pleasure in listening to Eminem, sticks out for being especially funny. The duo prove to be equally capable in terms of both comic timing and dramatic tension. They’ve taken previous criticism on board and project very well no matter where they are on the stage.

All of this serves to strengthen the message of their play, which is that men should be more open about their mental health. When Jean and Paul first touch on the weighty subjects, they don’t even want to say the words “depression” and “panic attack” out loud. There’s no room for subtlety in this conversation but there’s no need for it either. Seventy30 wants us to know how paramount these issues are and have created a noble work that should have significant consequences, particularly because Did It Hurt? is working in collaboration with male suicide prevention charity CALM.

Did it Hurt? is at Camden People’s Theatre from 6th August until 11th August 2018. For further information or to book visit the theatre’s website here. 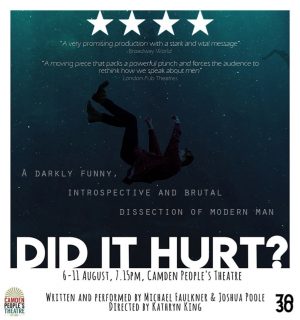