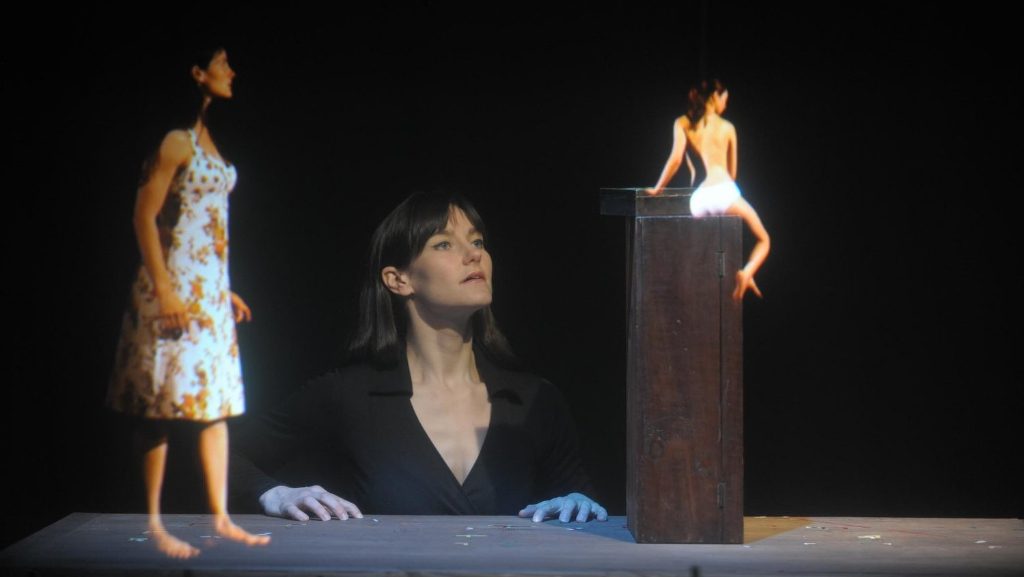 When it comes to experimentation of the form, this year’s Fringe does not disappoint. Puppetry and clowning enjoy substantial representation and there are many unique gems to be sniffed out.

Toujours et Pres de Moi offers a theatrical spectacle you’re unlikely to see anywhere else on the Fringe. It’s performed by two (bodily present) actors and three miniature holograms thanks to a 19th-century illusion known as a Pepper’s Ghost which uses a two-way mirror and projections. The result is mesmeric. Three holographic figures, crystal clear and silent, roam the stage, dance, dive in and out of boxes and play out the long-ago memories of the older pair, who watch on wistfully. With ethereal poignancy, it perfectly illustrates the pain of the nostalgic, of the yearning for a moment that can never be recaptured.

A Clown Show About Rain

Onto Silent Faces and the huge heart of their mime show. In A Clown Show About Rain, the ensemble presents a beautiful, almost wordless piece of physical theatre that is an invitation to playtime. A three-strong crew of shipmates and a pair of friends gone fishing draw us into their world.

The show elevates the small and familiar: the inhale-exhale we make in the moment of contentment; the rebellion of breaking daily routine; the way somebody else’s meal always looks better than your own; the joy of lip syncing. It’s a warmly empathic look at mental health and depression, and it seeks to show that those feelings shouldn’t be isolating; even the roughest waters can be overcome with the help of a few shipmates.

A Clown Show About Rain is at Pleasance Dome from 22nd August until 27th August 2018. For further information or to book visit the Edinburgh Fringe’s website here.

And now for another show on dealing with adversity. Fans of Blind Summit will always be grateful for any new creation by the renowned puppetry company. The sheer dexterity of their object manipulation and the innovative design in which they frame it are capable of making lifelong puppetry fans out of cynics. It’s a little disappointing to find, therefore, that their latest show, Henry, fails to excite the senses to the extent that we’ve come to expect.

Mark Down directs and performs the part of a thespian leading an object manipulation masterclass while also trying to come to terms with the death of the father he never knew. So far so good, and Down’s brooding class tutor is fully rounded and ripe for humour. But the parody of the fussy masterclass, in which two lycra-clad actors try to “become” the father’s belongings, only very occasionally gives way into something more substantial. The puppet, which the audience has been waiting for, is full of aesthetic character but not manipulated with Blind Summit’s usual detail, and his ghostly voice again seems like parody.

Henry is at Pleasance Dome from 22nd August until 26th August 2018. For further information or to book visit the Edinburgh Fringe’s website here.

This segues nicely into the final show of today’s roundup: The Flop. Hijinx Theatre worked with Blind Summit to create 2017’s show Meet Fred, a generous, moving, delightful piece of Bunraku puppetry. This year they’ve turned their hand to another type of theatre and teamed up with physical theatre company Spymonkey to create The Flop, a colourful, naughty farce serving up a dose of medieval history.

Set in pre-revolutionary France, a hapless nobleman fails to make his young wife pregnant and is sued by her family, leading to a Trial by Congress at which he must prove his virility.

The writing is laugh-out-loud funny and the performances spot on, from Adam C Webb’s deadpan delivery to Jess Mabel Jones’s perky naivety. Hijinx Theatre work with performers who have learning disabilities and this show also had a sign language interpreter; their inclusivity and engaging work make them ones to watch.

The Flop is at Summer Hall from 22nd August until 26th August 2018. For further information or to book visit the Edinburgh Fringe’s website here.