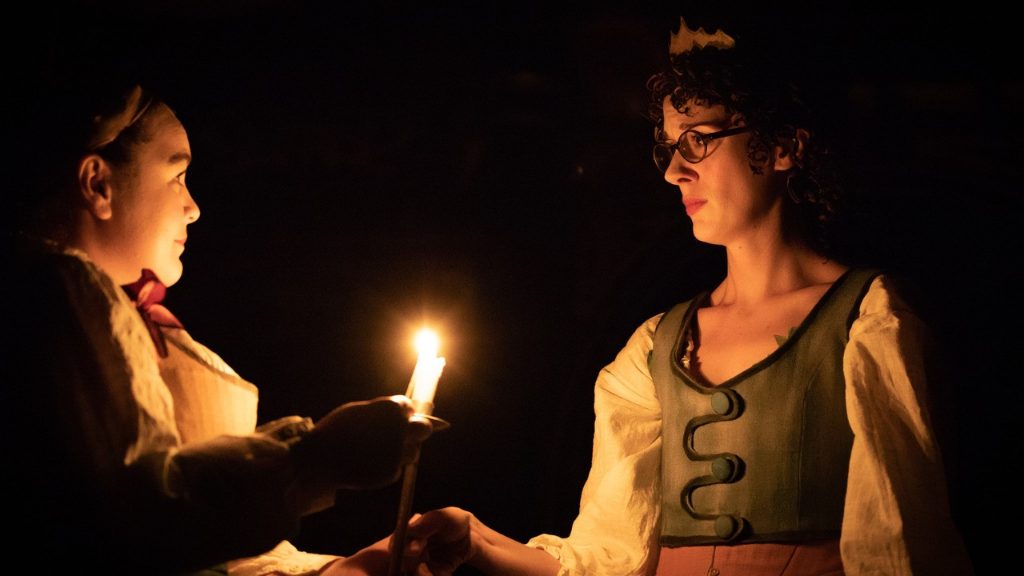 As Laurence Olivier has turned to Emma Rice, it’s only natural that the legacy of Shakespeare has become a war zone. On the one hand are those who see the Bard as something to preserve and to protect, and on the other are those who see reverence has a hindrance – who are eager to rip up the rule book. Wading gleefully into this mess is Nick Bagnall’s latest production. Taking on Love’s Labour’s Lost, one of the iconic writer’s earlier and lesser-dissected works, he pushes the script to its limits, testing – for better or worse – the boundaries of comprehension, humour and taste.

It would not be possible to talk about this adaptation without starting with the gimmicks. Bagnall crams the play with twists, jokes and asides. From a topless and writhing reading of a love poem, to a Muscovite take on Lady Marmalade, to the bold move of squeezing the characters of lusty Don Armado and his weedy page, Moth, into one frenzied actor, the performance does not stop to take a breath. The Don Armado/Moth combination, portrayed with admirable effort by Jos Vantyler, shows the weakness of this approach. The quick switches between a low, possibly offensive Spanish accent and a high-pitched Yorkshire one make the scenes very hard to follow, while to audience members less familiar with the script, it would not be clear what was happening at all. However, the addition of all these bits and skits do the job of reminding spectators that when this piece was originally performed, it was not highbrow entertainment but a good laugh. It also makes the most of Shakespeare’s best and characteristic humour: doubles, costumes and big reveals.

The staging really does fall short, however, when it comes to the final moments. After the comedies of misunderstanding and foolishness batter the King of Navarre and the Princess of France, pulling them and their waiting staff back and forth in a heady courtship, the play ends with a solemn twist. Unfortunately, the previous acts have not been subtle enough to build up to this moment and the tone change is jarring and uncertain. Even the addition of an incredible and haunting live soundtrack by Laura Moody can’t quite push the production to make sense of its ending.

Despite the warm glow of a stage illuminated by candlelight and several genuinely funny moments, this adaptation is a challenge. It certainly questions our relationship to Shakespeare and how we should read him, but it can’t quite get over its own tonal issues to make this question, let alone its answer, clear.

Love’s Labour’s Lost is at Shakespeare’s Globe from 23rd August until 15th September 2018. For further information or to book visit the theatre’s website here.