The Ridiculous Dark at the Gate Theatre 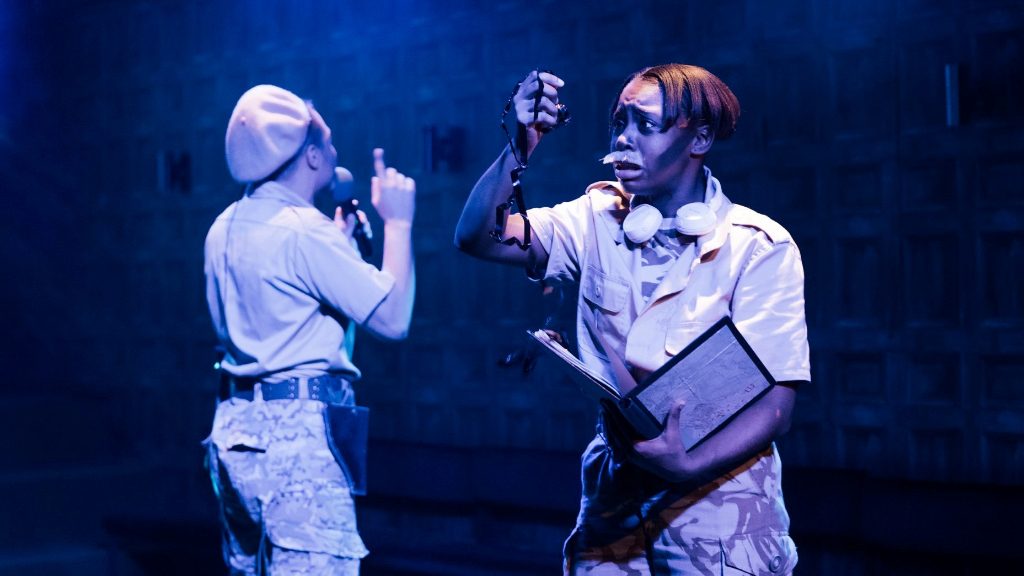 The Ridiculous Dark at the Gate Theatre | Theatre review

There is something about modern German playwrighting that lends itself perfectly to experimental theatre. Watching The Ridiculous Darkness brings to mind Roland Schimmelpfennig’s Winter Solstice. This play sees the Gate’s associate director Anthony Simpson-Pike adapt Wolfram Lotz’s radio play. Yet despite some brave and interesting metatheatrical elements and valiant efforts from the cast, the biting satire loses its razor-sharp edge.

Performed by a black female cast, the show opens with Somali pirate Ultimo (Rochelle Rose) explaining his story to a jury in Hamburg, when his account is hijacked by Sergeant Pellner (Travis Alabanza) and Officer Dorsch (Seraphim Beh), with the domineering Pellner telling us the tale of his journey up the Hindu Kush in search of the mysterious Lieutenant Colonel Deutinger, where he meets several eccentric characters along the way, all played by Shannon Hayes.

In an interview, Simpson-Pike said he found that Loyz’s blending of Joseph Conrad’s Heart of Darkness and Francis Ford Coppola’s Apocalypse Now made us see how the West subverts the narratives of others to allow itself to seem civilized. While the performances of Western figures by Beh and Alabanza are caricatured, though, they lack the comic punch which allows the director’s message to hit home. The same is true of Hayes’s multi-roling of four characters, crucial to the sharp comedy of this adaptation. One particularly valiant effort to generate comedy through encouraging audience members to provide backing vocals to The Lion Sleeps Tonight while she dances daftly is, unfortunately, met with embarrassment at participation and the humour is lost.

Having said that, Lotz’s script is incredibly challenging and even a Canadian adaptation by Alley Theatre was criticised for the verbose script seeming laboured, which again occurs here as all actors at times struggled under the volume of words. There are moments where the experiment achieves its hypothesis though, and Josh Pharo and Max Pappenheim’s design work creates a gripping and disturbing moment of darkness, as Pellner reaches the end of a “journey” that is far from ridiculous, achieving the desired commentary on Western cultural identity and, thus, saving this experiment from being a failed one.

The Ridiculous Dark is at the Gate Theatre from 27th February until 23rd March 2019. For further information or to book visit the theatre’s website here.

Watch the trailer for The Ridiculous Dark here: