Yamato – Passion at the Peacock Theatre 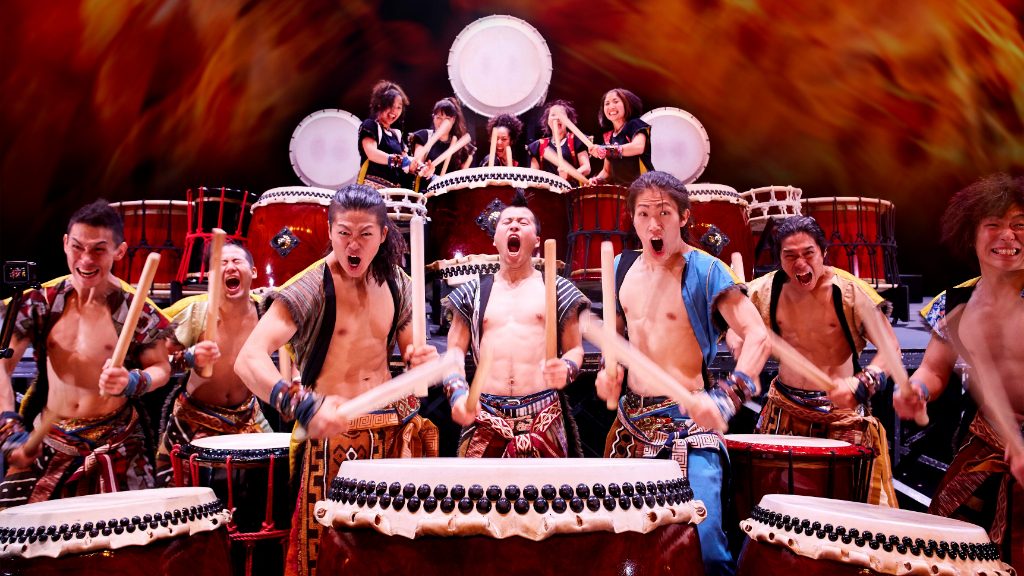 Japanese percussion troupe Yamato returns to London with a new show, Passion. Hailing from Asuka, a rural village in the Nara Prefecture of Japan, the company brings a contemporary take on traditional taiko drumming to audiences all over the world – since 1993, the group have played over 3,800 shows to a staggering 7,000,000 people.

Yamato holistically embodies the Japanese spirit. From musical compositions to set and lighting design, choreography, makeup and costumes, the troupe has meticulously designed every element of the show. Their energy is as raw and enduring as their homemade denim, and just as gloriously presented.

“We want to feel the energy of the passion with you all,” an unknown voice proclaims in the pre-show darkness, directly followed by, “The show starts now!”. In a flash, the stage is illumined to reveal artistic director Masa Ogawa’s spectacular set design: a fire-red backdrop calligraphed with Japanese characters, emblazoned with Yamato’s logo; 20-foot shōji contrasting with futuristic, steel-latticed light towers; levels of scaffolding housing progressively larger wadaiko the higher you rise; and a colossal drum (crafted from a 400-year-old tree) that takes centre stage and reigns over all. We absorb this along with the first drumbeat, which awakens in us some primal response.

The physicality of taiko drumming is extraordinary. Each beat resounds through our bodies – the rich reverberations shake our bones like an outside heartbeat that instantly alters our physiology. The intensity varies throughout the show, with quieter moments complemented by flute and softer female vocals. A crowd favourite is Ishikure, where the percussive shamisen (Japanese guitar) merges with human cries and seven drums of varying timbre to form a sound that resembles Japanese rock‘n’roll from the dawn of time – unlike anything you’ve likely heard.

What’s most unexpected in Passion is the humour the group creates, which often comes from the utterly loveable Kenta Ono – distinguishable from afar by his singular mohawk. During set changes, we’re treated to engaging mini-lessons in the art of expression through chants and clapping.

Yamato’s energy is catching. Their music and interactions encourage a crowd of all demographics to dispel the constraints of self-consciousness, so often adopted in order to appear civilized in London, and join in primal celebration of an intrinsic energy within us all. Tonight, the performers prove that London has heart – lots of it. Sometimes it just takes a devoted troupe of Japanese drummers to awaken it.

Yamato – Passion is at the Peacock Theatre from 12th until 31st March 2019. For further information or to book visit the theatre’s website here.