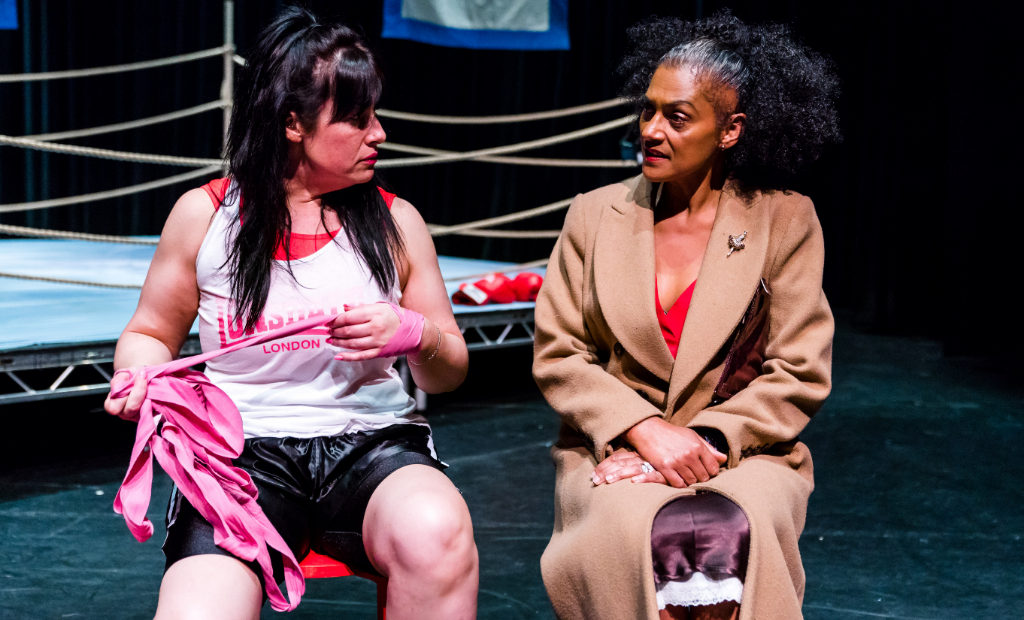 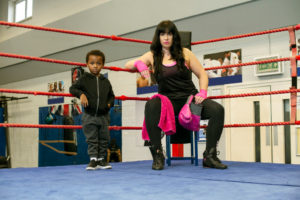 “I thought about giving up. But then I remembered who was watching.”

Lee is a single mother fighting for her rights to box at the local gym. Up against the antagonistic and thoroughly misogynist instructor, Tommy Caldwell, Lee is determined to follow her passions, without anyone getting in her way.

Straight off the back of her acclaimed show Muvvahood, writer and performer Libby Liburd – who plays the lead – takes inspiration from real life female boxing pioneers Cathy Brown – an ambassador for Fighter as well as a kickboxer – and Jane Couch who went on to win a number of world titles. Also motivated by her own experiences from taking boxing up over a decade ago, Liburd’s writing and performance is punchy and powerful. Lee does not easily take no for an answer, and rightly so; her opposition, Tommy (David Schaal), is settled in his antiquated ways  –  “Girls should be pouting, not clouting.” There is as much heart and soul in this as one is likely to see in an off West-End drama, as well as effective humour, mixed with hard-hitting pathos. Thanks to a witty and acerbic script alongside Julie Addy’s sharp direction, which makes surprising use of the venue’s upper floor gangway, the actors are terrific in their respective roles, from Cathy Tyson’s potty-mouthed Alison (Tommy’s gutsy wife) to Schaal’s evolving gym instructor and Liburd’s promising amateur boxer.

The piece also involves young boxers from Fight for Peace academy in Newham, setting the scene of a gym, with skipping ropes, feints, swerves and a punching bag. Some of these young trainers make appearances in the show, and a few of them could have done with some more acting training in rehearsals, to make their performance less rigid, but this can be easily overlooked.

Professional female boxing has had a reasonably short career; England boxing – known until 2013 as the Amateur Boxing Association – lifted the ban in 1997, although female boxers have been participating in the sport as far back as the 18th Century. Liburd’s play is a direct addressing of the fight for female rights in the world of professional boxing, and simultaneously exists to encourage others to battle for their pugilist right – or anything else they have a passion for. Though we don’t see the prize-winning fight between Lee and her Belgian opponent, the play successfully sends its message, and is a joy to watch. Combining a great urban soundtrack with strong performances and a heartfelt story, Fighter inspires and fills viewers with a brazen determination.

Fighter is at Stratford Circus Arts Centre from 25th until 27th April 2019. For further information or to book visit the theatre’s website here.

Watch the trailer for Fighter here: