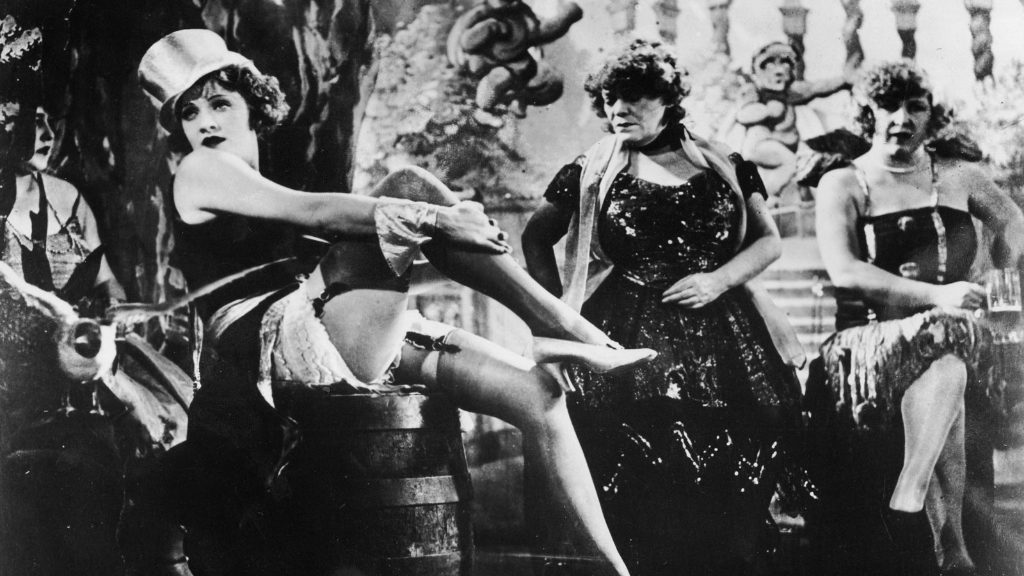 Cramped rooms in wonky buildings provide the stifling setting for Josef von Sternberg’s classic of the early sound era. In a devastating tragicomedy of misguided love, humiliation and regret, the celebrated Austrian director announces his arrival in this new technological age and simultaneously welcomes a fruitful relationship with the film’s star, Marlene Dietrich, with whom he would go on to make numerous movies.

The picture had been eagerly anticipated as von Sternberg and inaugural Oscar-winner Emil Jannings’s (the actor who plays the central role, the professor Immanuel Rath) first foray into sound cinema. However, the feature made an instant star of Dietrich, and such was the acclaim she received for her role as the professor’s temptress, Lola Lola, that production companies regularly cut off the professor’s agonising final moments in order to have her character perform a song for the film’s denouement. This latest release keeps Rath’s sorry goodbye, letting the audience witness the final vestiges of his honour fade away.

“Men swarm around me like moths ’round a flame. And if their wings are singed, surely I can’t be blamed”, sings Lola Lola in the aforementioned performance, a crowd-pleaser in a stage show she is contracted to. The line runs something like an unofficial slogan. The star is a mesmeric figure with many admirers, including students from a nearby college. The lovestruck boys are students of the venerable professor Rath, a well-regarded bachelor in this quaint corner of 1924 Germany.

Searching for his students, the academic stumbles into Lola Lola, and, like a moth to a flame, is lost to her dazzling splendour. Years pass by, and each time we fast-forward, Rath slips further and further into misery, jealousy and humiliation.

Jannings has vast experience playing characters rich in pathos and destitute in luck, making him perfectly suited to the role. Where this portrayal differs from his previous work, and where the actor struggles, is sound. Accustomed to silent movies, Jannings performs with exaggerated movements and with excess emotion poured into each facial expression. It may not have aged spectacularly well, but it serves the comedic elements of the feature well. In contrast to that of her co-star, Dietrich’s performance embodies the development of cinema. With equal understatement and exuberance, the actress excels in her slightly villainous role.

For those interested in the history and evolution of film, or even those just looking for entertainment, this revolutionary, monumental classic of the early sound era is a must-see.

The Blue Angel is released in select cinemas on 31st May 2019.

Watch the trailer for The Blue Angel here: