Doves at Somerset House: A spirited set that leaves the crowd wanting more 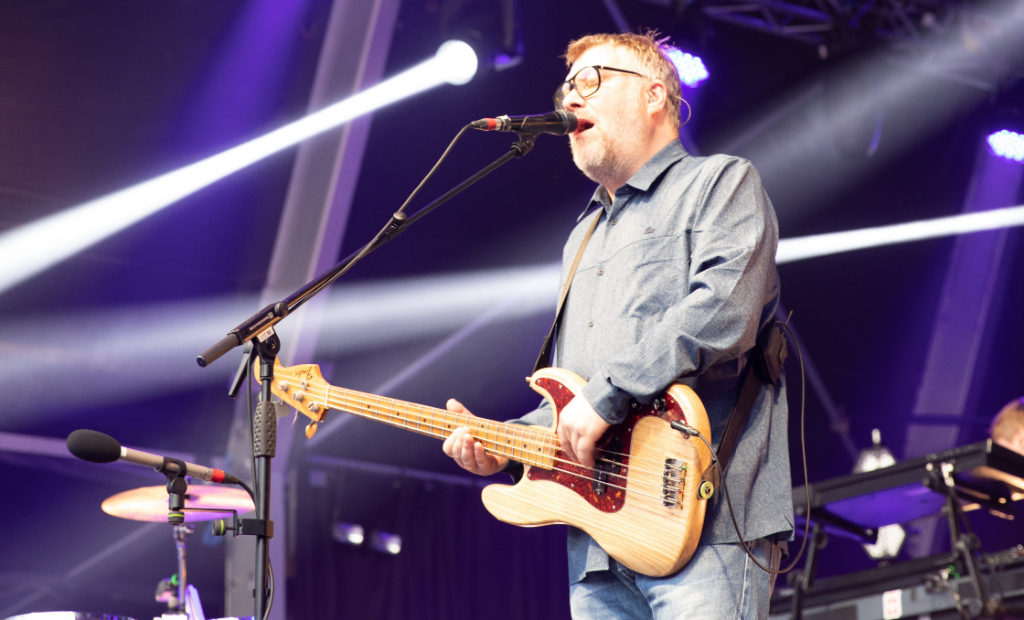 Legendary Manchester act Doves return from their 2010 hiatus to play the inimitable Somerset House, having last performed at the gorgeous open-air venue in 2005. Lead singer Jimi Goodwin is in good spirits, greeting the evening’s crowd and jokingly commenting what a wonderful city London is, though “it pains me to say it.”

Kicking off the set is Firesuite (Lost Souls, 2000), a slow-burning instrumental with Goodwin on bass guitar, twin brothers Jez Williams and Andy Williams respectively on guitar and drums, and tour musician Martin Rebelski on keyboard, the song making way for rockier tunes to come. Snowden, taken from 2005’s Some Cities, is glorious in the perfectly rounded acoustics, 15 light stands at the back of the stage flashing on every beat. The nostalgia-driven Rise contains stunning verses and wistful melodies that perfectly complement the surrounding architecture and summer evening, Goodwin’s drawling vocals sounding a lot clearer in the open space, backed by sparkling keys – definitely one of the initial highlights. In keeping with earlier material from 2005, the group perform Black and White Town, the official music video on the screen depicting bored youths in industrial British towns, tonight’s crowd remembering their own childhoods. They then give a rendition of Last Broadcast, bringing again a sense of the sanguine that the band excels at, the guitars softly keeping rhythm, Jez then leading on vocals for Words, backed by Goodwin.

Kingdom of Rust, from their 2009 eponymous LP, recalls country music and has one attendee gleefully riding an invisible horse, though an interminable whistling sound is best left out. Goodwin thanks his crowd, playing 10:03, followed by Caught by the River, the chorus bringing everyone together, folks hugging and swaying, chanting with the singer. The ensemble’s first-ever single, The Cedar Room, it is every bit as heartfelt as the rest of the material tonight, but what categorically stands out are the final encore songs, the first being There Goes the Fear, which is highlighted by the samba-style drumming solo by Goodwin and cowbells by Jez. Commemorating the 50th anniversary of the first moon landing, the trio then perform Space Face, a 12” single taken from the band’s earlier 90s group Sub Sub, resonant of British electronic groups from the 2000s such as The Beloved and Orbital, ending the gig on a massive rave high.

Doves are recognised for their ability to instil optimism in listeners, even while the subject matter can be melancholic, and tonight’s concert is a testament to that. Though Goodwin’s vocals are something of an acquired taste, and the songs could have been arranged in a more unique manner, the Mancunians measured up, leaving the crowd wanting more, a sure-fire sign of a great gig.

Watch the video for Black and White Town here: