A Day in the Death of Joe Egg at Trafalgar Studios 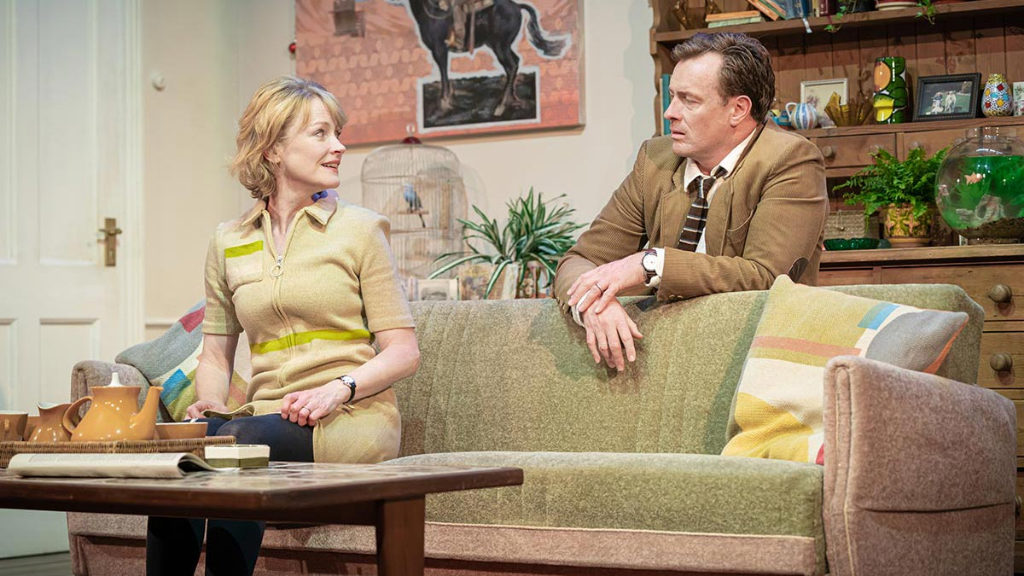 A Day in the Death of Joe Egg

It’s rather daring to resuscitate a dark comedy from 1967 in our hypersensitive times, especially one which features some extremely politically incorrect language, as is the case with A Day in the Death of Joe Egg. But Simon Even pulls it off, and it is a powerful revival, featuring fantastic acting, great lighting and set designs, and writing which has aged surprisingly well. This is an often hilarious but always depressing depiction of life with a disabled child.

Based on author Peter Nichols’ own experience, the play explores how Bri (Toby Stephens) and Grace (Claire Skinner) cope with their daughter Joe (Storme Toolis), who suffers from cerebral palsy. Wheelchair-bound and unable to speak or otherwise survive on her own, she is a constant strain on the couple, who go through tremendous hardships to keep afloat. Bri develops a fatalistic attitude, constantly making jokes at Joe’s expense to cope with the situation, whereas Grace is much more optimistic and believes that one day her daughter may be able to develop some form of independence.

Much of the production’s force stems from the strong acting. Both Stephens and Skinner are funny, miserable and believable; they are particularly human, and one can hardly help sympathising with both of them given the circumstances, even when some of their choices later in the play seem questionable. Toolis as Joe is absolutely fantastic, which is especially remarkable given her character’s silence and passivity.

The set is conservatively but cleverly designed by Peter McKintosh, who creates a typical family living room but makes it cluttered and small, reinforcing the claustrophobia Bri and Grace experience. Prema Mehta’s lighting is both apt and subtle, highlighting individual characters when they momentarily step out of their roles and address the audience directly.

The second half of the play is weaker than the first, since it breaks away from the general study of how to cope with a disabled child and instead ventures to introduce new characters. While these are formidably acted, their portrayals are generally one-dimensional and add little to the discussion, as funny as they are. But this doesn’t detract from the fact that Joe Egg is a strong production which never ceases to entertain.

A Day in the Death of Joe Egg is at Trafalgar Studios from 30th September until 30th November 2019. For further information or to book visit the theatre’s website here.

A Day in the Death of Joe Egg