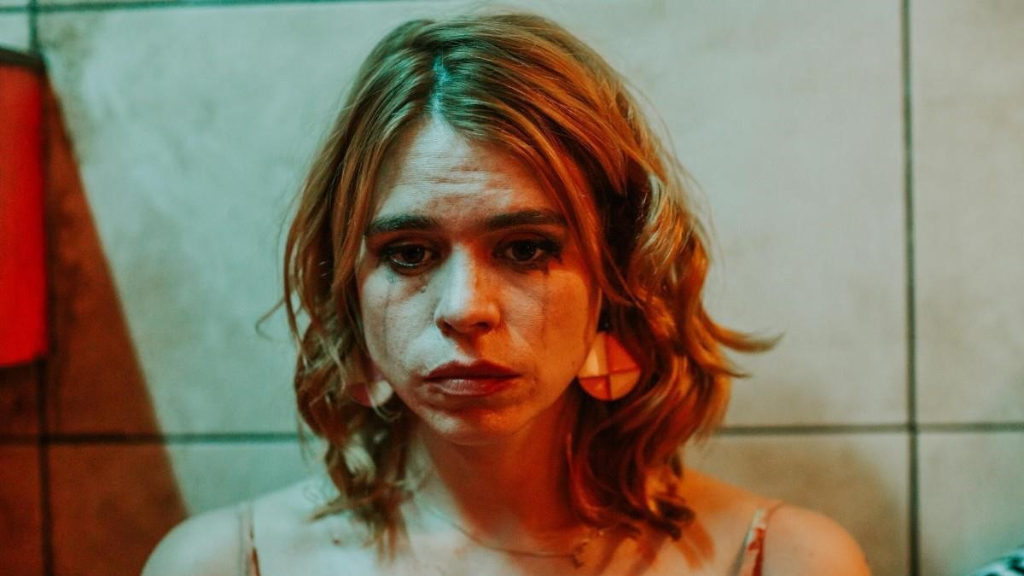 It’s easy to see why this film premiered at Venice. Unabashed and visceral, this is a feature that’s not making any attempt to be mild-mannered or meek.  In one particularly striking – if slightly unsubtle – scene, young Mandy dances in front of her family, but as she ages into her current self, her steps become desperate, her performance of femininity faltering. This sequence is much like the fledgling director’s style, which pulls you up and keeps you on edge, the camera spinning from scene to scene, the soundtrack pulsing at a relentless pace in a perplexing whirlwind until you are mentally exhausted.

This picture might be a bit too intense to bear if it weren’t for its biting sense of humour. The film is marketed as an “anti rom-com”, and the screenplay certainly testifies to this tone, with Mandy and Pete sparring in an unconventionally aggressive way, flouting the usual tropes of foppish boy and clumsy girl. The pair give sharp performances, and yet there is something a little uncrackable about their chemistry – it’s never quite convincing that these two starkly unsentimental characters would be drawn to each other in the first place. Mandy is career-driven and without boundaries, whilst Pete comes from a stiflingly conservative Christian family. The quirkily staid vibe between them can be hard to engage with, and even the role of the parents (David Thewlis and Kerry Fox) becomes somewhat murky.

Nevertheless, this is not a film that is trying to be definite. Piper never gives in to simplification: how can you possibly boil down your feminist message when what one woman wants is worlds away from the desires of the next? Rare Beasts rejects the pointed fingers, the crushing pressure, the preachy condemnation that blames women for their contradictions and insecurities. It decries the cult mentality that puts marriage on a pedestal. The story is unsettling – but it is through her depiction of unsettled identities that Piper remains gloriously defiant.

Rare Beasts does not have a UK release date yet.