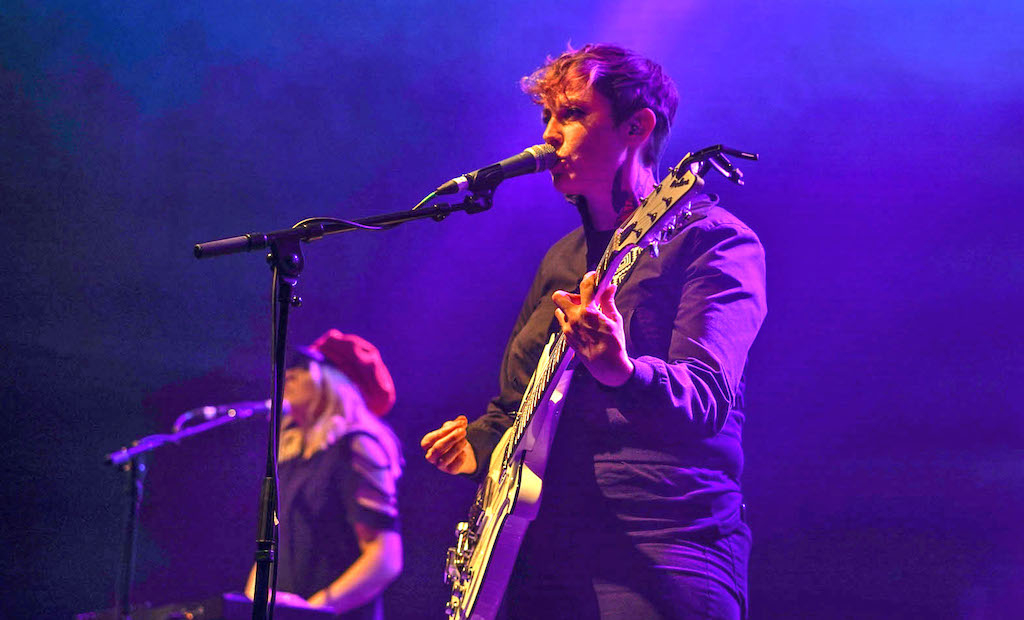 She Drew the Gun at the Electric Ballroom | Live review

Resist, Revolution of Mind, Thank You

This four-piece hail from the Wirral, following a sterling heritage of excellent Merseyside bands. Fronted by passionate singer/songwriter Louisa Roach, they won the Glastonbury Emerging Talent Award in 2016 and have seemingly not stopped touring since. Two albums have followed, most recently Revolution of Mind.

The stage last night was set up with a screen onto which psychedelic visuals were projected throughout: a never-ending eye in pop art colours, kaleidoscopic swirls and an arresting image of a gun made from musical instruments (the cover art from 2016’s Memories of Another Future). These visuals really added to the show and complemented the psych-pop flavour of the music. Trippy guitar licks from Jack Turner peppered the one and a half hour set, creating a sound you wanted to bathe in. The venue has excellent lighting technicians who created various moods; washing the stage in bordello red or refracting white light beams to entrancing effect.

Louisa Roach is a charismatic frontwoman, with more worthwhile things to say in one gig than some musicians manage in an entire career. Her lyrics are powerful and agitating. Revolution of Mind is a call to arms against apathy, with drums beating like a military tattoo adding to the subversion. The irresistible Resister and Resister Reprise call for resistance and love: “Don’t let your heart close its fist.” The screen shows the Extinction Rebellion logo as Roach asks us to save and enjoy our beautiful planet. The lyrical dexterity is striking: “Inequality booming”, “doctrine is toxic”. On Where I End You Begin, Roach talks to her blackout drunk self, “last time you’re making a fool of me”, which is compellingly honest and personal.

Naturally, Roach is a feminist and she thanks her female influences on Thank You, the screen flitting through images of the likes of Frida Kahlo, Amy Winehouse and Janis Joplin to name but a few. It’s a simple conceit but surprisingly powerful.

Some political pop can feel overly worthy, but the band has the tunes to convey righteous messages with elan. Protesting and having a good old dance are not mutually exclusive. The set ends with a cover of Sweet Harmony by The Beloved, the ecstatic rave classic, a love song to good vibes. The technical term for it is an absolute banger. A fitting end to an exhilarating show.

For further information and future events visit She Drew the Gun’s website here.

Watch the video for Resister here:

Resist, Revolution of Mind, Thank You