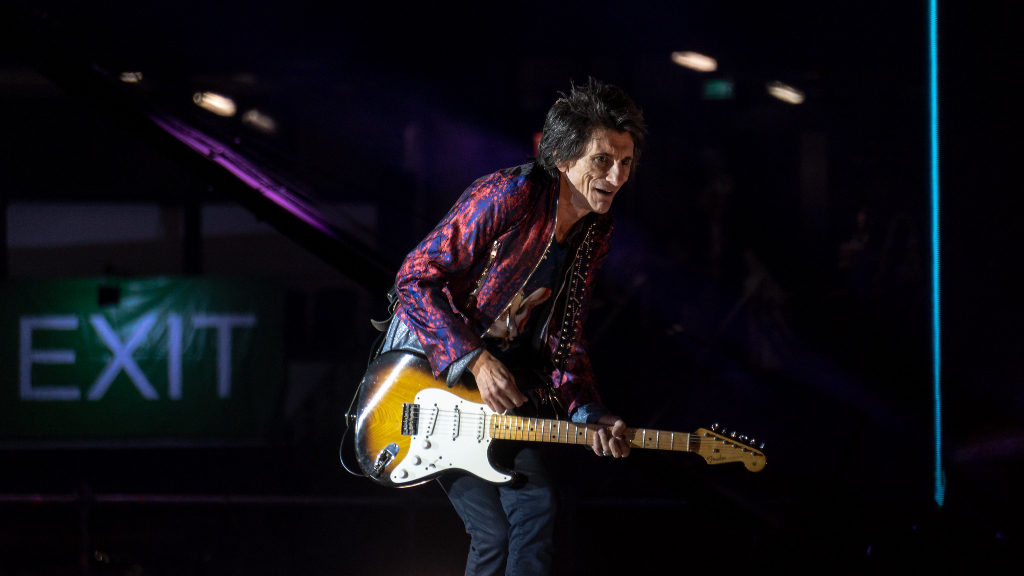 Ronnie Wood shakes and rolls Shepherd’s Bush Empire with everlasting hits from rock legend Chuck Berry. The production of the American pioneer of the genre has been a sort of Bible for the Rolling Stones member. Wood’s new album Mad Lad aims to be the first of a trilogy in tribute to the artist’s musical heroes. Accompanied by an exceptional band, he offers London a full swinging night.

Ben Waters and his men prepared the scene, warming up the venue with Roll Over Beethoven, where some serious drum skills were mastered. Wood enters with a casual air and positions himself under a beam of light while the audience explodes in applause and screams. After a swift greeting, his fingers move nimbly on the fretboard of the guitar, and Little Queenie sounds as fresh and brilliant as it must have been in the 60s. The musician soon gets rid of his leather jacket to reveal a more characteristic leopard-print open shirt. The reason for this gig’s existence, in Wood’s words, is to respect a great legacy that has accompanied him since childhood. And so begins an utterly enjoyable trail of hits – historical tracks as well as less-known pieces – with no apparent connecting thread except the musicality and whim of the players. With Don’t Lie to Me, Wood unleashes his energy: smooth and bouncy, he starts his rhythmic hops, infectious to see. The saxophones add a powerful flow to the song.

A touch of blues comes in with Blue Feeling, an instrumental piece that allows Waters’ intense piano ample space to shine once again. For Wee Wee Hours, the powerful vocals of Irish singer Imelda May are introduced as an enthusiastic component of the night. The Wood-penned Tribute To Chuck Berry, one of the new album’s original songs, keeps a moderate pace, featuring a reiterated guitar solo characteristic of Berry.

Another great female voice pairs with Wood’s for Run Rudolph Run. Smart in all black and sunglasses, Lulu presents the song as her favourite Christmas music and, with her raspy voice, throws herself in flawless moves.

Berry’s down-to-earth lyrics are clear in tracks like No Money Down. Wood points to the romance-free texts and how wonderfully he found inspiration in cars and motorways.

At this point, the whole band seems unstoppable. After what looks like the last song, Bye Bye Johnny, Wood and his Wild Five don’t leave, but instead put heart and soul – and a magnetic sequence of piano and guitar solos – into another couple of pieces. Johnny B. Goode is the rocking finale. What else can be said of a living icon, after such an utterly enjoyable number? Go Ronnie Go!