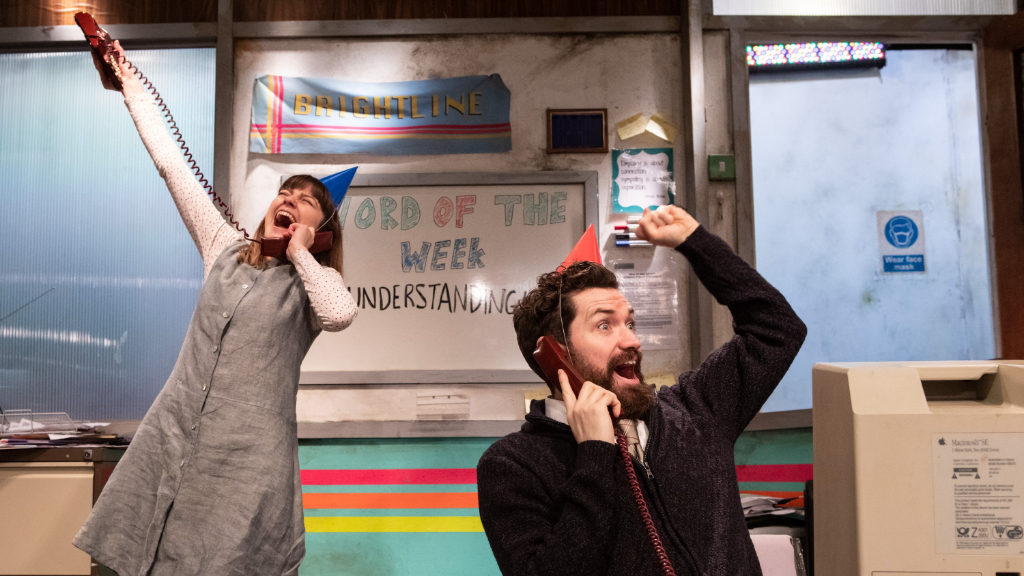 Seeking a positive story out of broken bridges that turn the sea into a thick, viscous liquid, and degrade the air quality so much that movement without a mask is inconceivable, seems impossible. Especially while the real world is experiencing global warming. You Stupid Darkness! tells the tale of a group of unlikely friends who work together to offer some hope.

In a run-down office in an undisclosed Northern city, Frances (Jenni Maitland), Angie (Lydia Larson), Jon (Andy Rush) and Joey (Andrew Finnigan) spend every Tuesday evening at a call centre that serves to support those struggling in their daily lives. However, Sam Steiner’s narrative on climate change makes for a dull and trivialising addition to a complex situation, without daring to make any clear statements about its position in the debate. This play is ostensibly concerned with the banality of routine, even in the event of a natural disaster, but without offering depth; it is itself banal.

The characters either speak over each other in a jumble of words and exaggerated emotions, or they face one another in awkward silences. Echoing characters from the television series Friends, Steiner’s plot and personalities depend more on cliché than substance. There is some play between the young Joey and grumpy Jon when Jon’s husband calls the service. Long after he hangs up, Joey continues the conversation, which only provokes Jon’s evident distress more. But this goes no further.

A kettle blows up, water floods the office floor, posters fall down and the lights go out, all whilst the characters persevere with a pointless plot. These obstacles seem to suggest verisimilitude, and yet a heavily pregnant Frances runs around the set without once holding her lower back for the pain of the weight she is supposedly carrying. In the same manner, the storyline does not genuinely consider the weight of the climate disaster: routine will itself be indicative of the power of perseverance – cars, buses, phones and shops continue uninterrupted.

You Stupid Darkness! is at Southwark Playhouse from 16th January until 22nd February 2020. For further information or to book visit the theatre’s website here.