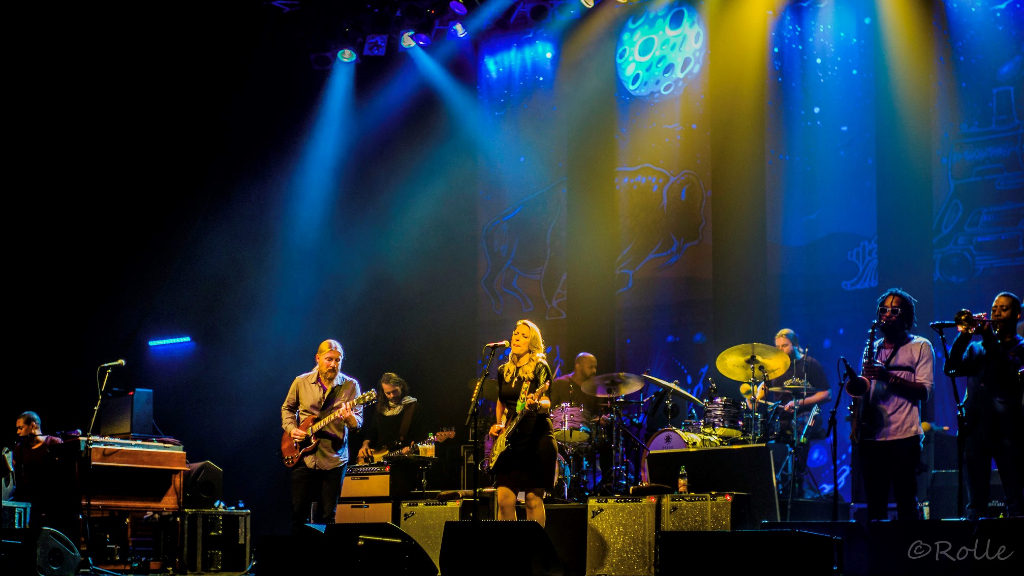 Shakin' Hands with the Holy Ghost, Midnight in Harlem

Two of the most exciting bands on the US rock scene treated a packed-out Wembley Arena to potent sets displaying stunning musicianship on their only scheduled UK date on Saturday 1st February.

Hailing from Atlanta, Georgia, the normally five-piece Blackberry Smoke (augmented tonight by a percussionist and a third guitarist) kicked off the evening’s entertainment, beginning their blistering tenure with the emphatic Lord Strike Me Dead, from their most recent LP, 2018’s Find a Light.

They turned to the album again for the second track, the mid-tempo rocker Run Away from It All, while their third number, the explosive Waiting for the Thunder – one of the best tunes in their 20-year career – boasted some great Hammond organ accompaniment courtesy of Brandon Still.

Although most of the crowd remained seated, they received the group with real enthusiasm, shouting out “We love you Charlie!” in the direction of lead singer, guitarist and every inch the long-haired rock star, Charlie Starr, who was in fine voice. The old-time groove Ain’t Got the Blues had everyone passionately singing along.

Starr introduced their finest song to date, the monumental Shakin’ Hands with the Holy Ghost, by saying that it was the first single Blackberry Smoke ever released in the UK, and also commented on the length of the band’s visit to these shores this time around (they were due to fly back home the following day): “It might be the shortest period of time that we’ve ever spent in your beautiful city.”

While Blackberry Smoke delivered short, sharp bursts of soulful rock, country and blues, the Tedeschi Trucks Band – led by husband and wife Derek Trucks and Susan Tedeschi – performed masterful, and often very mellow, extended jams, incorporating a number of different genres and instruments. Everyone on the floor of the arena was on their feet as the first notes of opening number Signs, High Times echoed throughout the venue.

Although the band had 12 exceptionally talented musicians on stage, including the very welcome inclusion of two drummers, a horn section and backing vocalists, it was guitarist Derek Trucks who commanded most of the attention with his exquisite playing. Like all the best guitarists, the former member of The Allman Brothers Band knows when to cut loose and when to rein it in.

As well as being an amazing singer, Susan Tedeschi is also a fine guitarist, demonstrating her skills on the instrument throughout the evening. There were bass solos, keyboard solos, trumpet solos and lead vocal contributions from the backing singers.

Highlights included the glorious Midnight in Harlem, Bell Bottom Blues (a cover of the Derek and the Dominos classic) and a well-received version of Charlie Segar’s Key to the Highway, on which Charlie Starr also performed.

Offering the opportunity to witness two fantastic bands – giants in their field – in the capital for one night only before they flew back to the States, this gig was a real privilege to attend.

Shakin' Hands with the Holy Ghost, Midnight in Harlem