Sauce by the Langham cocktail masterclass: An in-depth and engaging foray into shaking and stirring 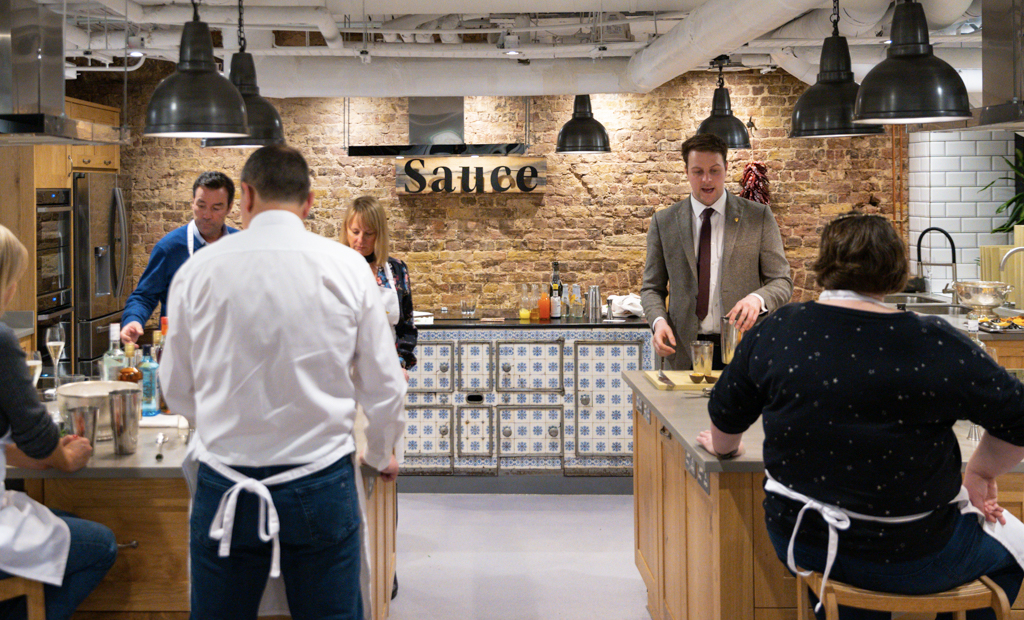 Sauce by the Langham cocktail masterclass: An in-depth and engaging foray into shaking and stirring

Sauce by the Langham cocktail class

Blending, shaking, stirring, straining, garnishing. It is delightful to have a classic cocktail at an elegant bar in central London. But it is also true that there is great satisfaction in preparing one by yourself – and if the backdrop is aesthetically pleasing, even better. Sauce by the Langham, the cookery school based in the luxury hotel just off Regent Street, has added extra classes to their tasty 2020 programme, and they include dates to learn the ins and outs of making classic concoctions. The teachers are members of the team at the Artesian, the award-winning bar at the hotel, featured yearly on the World’s 50 Best list.

The cocktail masterclasses provide a comprehensive introduction to the world of cocktail making. Running on late afternoons for a couple of hours, the course guides participants through the preparation of three classics. For our booking, we had the opportunity to get hands on with a mojito, bee’s knees and a rum old fashioned. Throughout the process, we were explained the single passages and techniques that could also be replicated for other drinks. Not just a read through the recipes, then – which would be provided anyway at the end of the evening – but a succinct toolkit for the world of cocktail making. From properly chopping the citron – never in four parts! – to adding the correct number of large ice cubes; from learning when to stir and when to shake a mix, to mastering the tools and glass shapes. 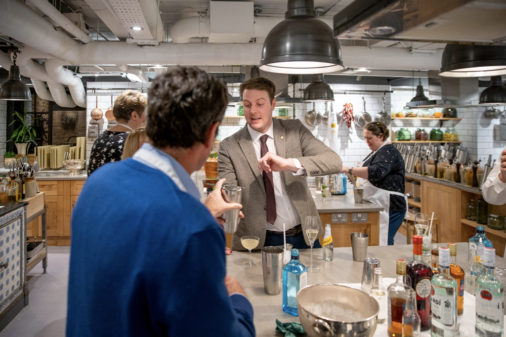 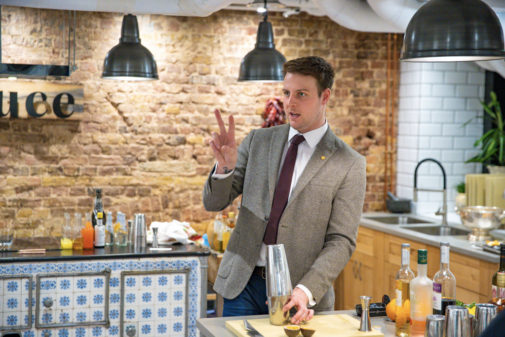 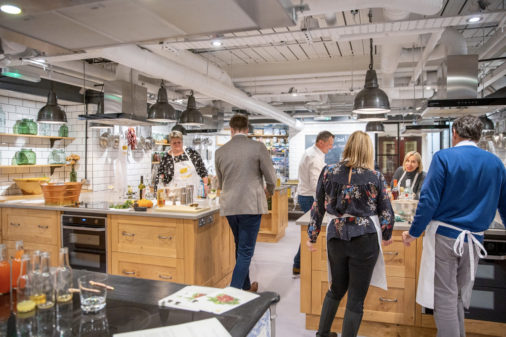 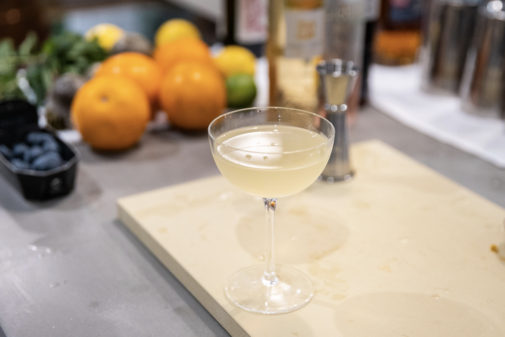 Based in the Sauce kitchen, the course steers away from stiff learning; rather, the environment, thanks also to the small size of the group, soon becomes very friendly. And in order to break in between drinks, there was a selection of British cured meats and a cheese platter, respectively by Cannon and Cannon and Neal’s Yard Dairy, to snack on. The tutor of our night was bar supervisor William Campbell-Rowntree, who not only offered very relaxed and fun teaching, but introduced us to a fourth cocktail: his very own Changing Waves, a creation that earned him a spot at the Bacardi Legacy final. 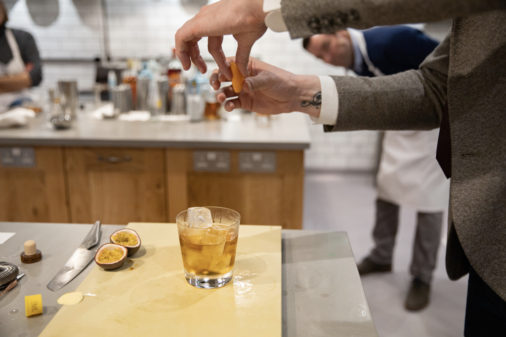 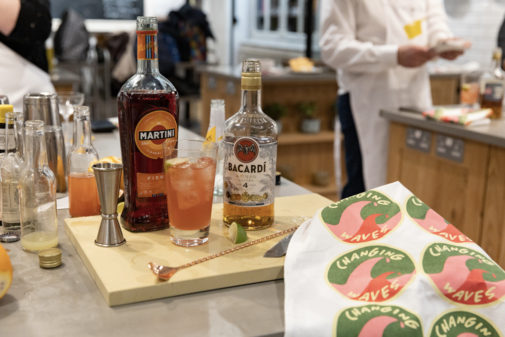 A pretty exciting moment of the masterclass was the visit to the Artesian laboratory. A lot of chemistry, testing and tasting appear to be behind the production of each drink, and indeed the equipment in place make this room like a science lab: a rotary evaporator, a dehydrator, a sous vide machine and a water bath. Every piece, and the fascinating reason behind its use, is explained. These tools have become essential now that the bar has taken a minimalistic approach for its cocktails. Less can be more: every tipple on the menu is made with only two flavours. 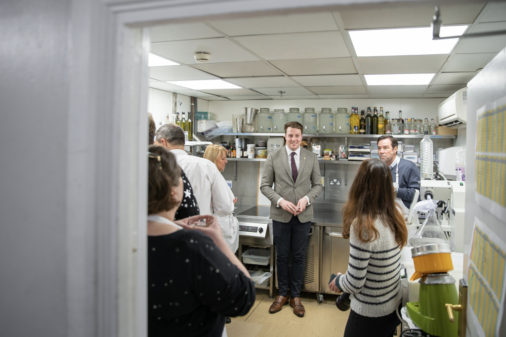 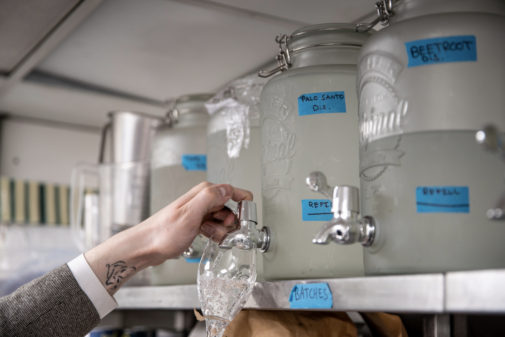 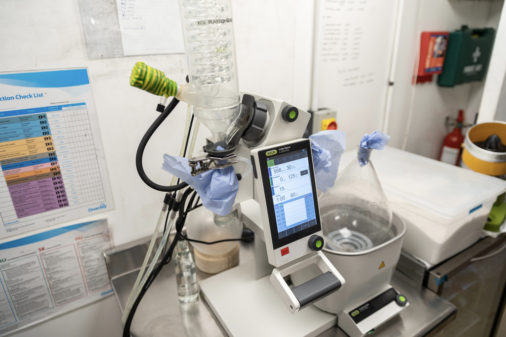 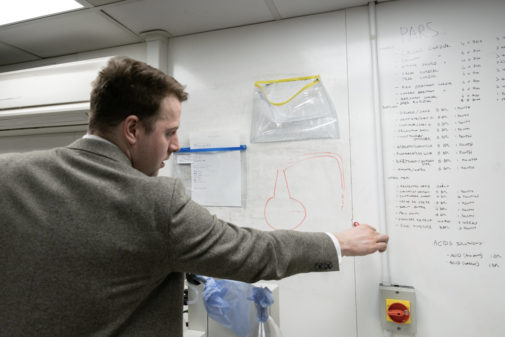 Next to the cocktail masterclasses (save the date: the next one is on 12th March), in the Sauce’s learning programme there are also dates for whiskey tasting (the next coming up is on 15th April) and, of course, the cookery courses. These latest entail learning techniques such as mastering pasta and knife skills. Among the new entries of the year, there are cooking classes focused on nutrition and well-being and special Saturday sessions for kids.

Still impressed by the clear liquids in the jugs from the laboratory, labelled as containing a very distinct essence, we had to stop at the Artesian to actually taste their use in a cocktail. Already familiar with the smart and dim-lit venue, we took a place this time at the counter, where the interaction with the bartenders was buzzing. The signature cocktails list could be read on a traditional piece of paper or on an elliptical game that the team has commissioned, with a wooden bar for every tipple on offer and its two main flavours inscribed on each side of it.

The first of our choices fell on the Michter’s Small Batch Bourbon & Passe-Crassane Pear. The fruit – or better, its intrinsic zest – has been filtered and distilled to produce a transparent liquid that tasted 100% like the original element. Added to the bourbon, the result is a velvety concoction that awakens all the senses. The Armagnac & Zalotti Blossom was pure bliss. The components of the cocktails could be traditional and selected liquors as well as natural ingredients. In this case, the flower – or, better to say, the extract of its essence – delicately enriches the brandy for an intricately exquisite drink. 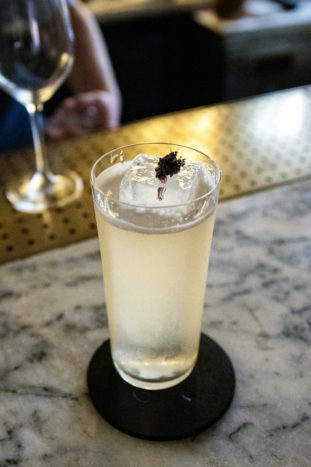 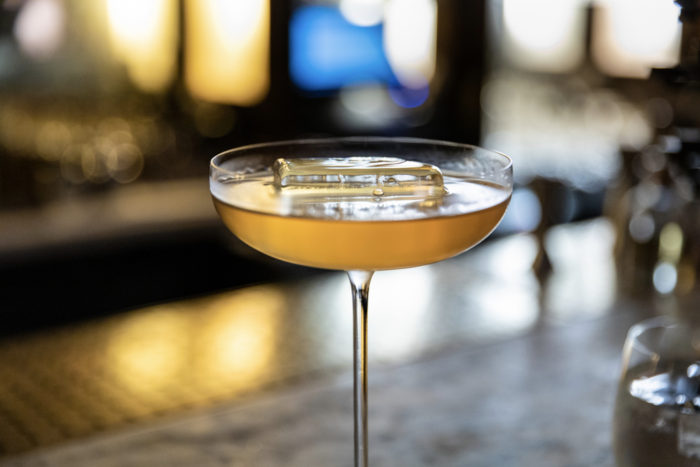 Almost difficult to believe for the simplicity of each offering’s presentation and composition, the minimalist cocktail list at the Artesian takes the visitor back to the essence of the each cocktail and fragrant savour of its elements.

To book one of the classes at Sauce by the Langham, 1C Portland Place London W1B 1JA, visit their website here.

Sauce by the Langham cocktail class