A much richer today: An interview with She Dies Tomorrow star Jane Adams 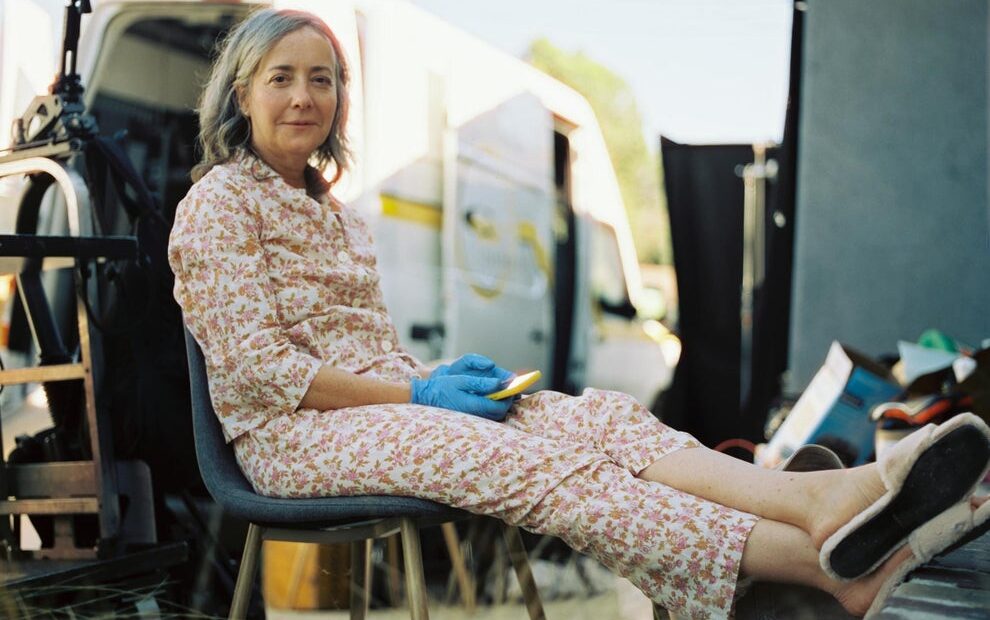 A much richer today: An interview with She Dies Tomorrow star Jane Adams

She Dies Tomorrow is the genre-bending second feature from writer/director Amy Siemetz that follows a seemingly contagious “mind virus” that spreads from a woman convinced she will die the next day.

Eerily prophetic of the pandemic-ridden reality, Siemetz’s off-the-wall, darkly comic psychological thriller grapples with the idea of how we accept or resist the idea of our own mortality. Disturbing yet funny, morbid yet playful, this viscerally experimental film gives our deepest fears disconcerting tangibility.

We had the pleasure of speaking to Jane Adams, who plays a character also called Jane.

Hi Jane, thank you so much for taking the time to speak with me – if virtually! Not quite the same as being in the same room, is it?

No, it’s really not! And I’m not used to any of it either.

This is not your bog standard kind of film: it’s not something that fits neatly into a category or a synopsis. How would you try and capture what She Dies Tomorrow is all about?

I mean, it’s interesting that it’s called She Dies Tomorrow because what I would hope people take away is just that we all are only guaranteed today. Like, this moment is really all we have. Later this afternoon, you know, I could pull out onto the Pacific Coast Highway and get in a fatal accident and that’s the end. Life’s never been safe – and would you really want it to be? You know? I mean, maybe that has something to do with growing up in a generation where we didn’t even have bicycle helmets. You better handle yourself or you’re going to crack your head open was my reality.

What was it that drew you to being involved and to playing this character, specifically? I don’t know how much you could glean from the script – a lot of the magic comes alive with the actors and the visuals and the very specific way it’s put together?

The main draw was just working with Amy [Siemetz] because we became friends working on something in my apartment in New York with Joe Swanberg in 2008, and we’ve been friends ever since. And she’s somebody that I can call and also vice versa – she can call me at two o’clock in the morning and we’ll talk about, you know, anything. So when the Malibu fires happened here, I had to leave my apartment and stay downtown, which put me closer to where Amy lives in Eagle Rock. And so she said, “Oh, just come over. I’ll shoot some stuff with you and Kate [Lyn Shiel] that I’ve been thinking about.” There wasn’t a script yet, there were just pages. There were just a few scenes: the one where Kate’s on the floor and the one with the leaf blower in the backyard. And that’s all that existed. There was no, “What is this about?” because it wasn’t about anything yet, that was clear. But both Kate and I love working with Amy, and Kate and I love working with each other. So it was a pleasure to just show up. I love the way Jay [Keitel, cinematographer] shoots things, and he was shooting it so I just thought, “Well, she’ll either keep going with this or not, but it doesn’t matter because I enjoy this moment, just working with them.” And then we would talk on the phone and I remember Amy emailing me some more pages and she was saying, “What if it’s a virus of the mind?” And I thought that was amazing. And then after that it was just a jumble of more pages and it just kept evolving.

I think that comes across, because it’s somewhere between a comedy horror or an experimental film. It must have been a lot of fun to make it in that way!

How did you see your character of Jane? She’s quite a contrast to Kate’s character, Amy, who from the beginning is already in this particular mental state – with Jane, we get quite an arc.

She becomes supremely affected and unmoored a bit by what happens to her. That’s what you want – it’s always fun to start in one place with a character. I’m always encouraging writers and directors to make things uncomfortable for my character, and I’m attracted to scripts where I can see – fabulous – this person is in this sort of comfortable state, or they are this person and then by the end, they’re in a completely different place. That’s fun to play. That’s drama. That’s comedy.

Your character in particular gets quite a lot of unexpected comic moments, despite it being a disturbing horror film – for example when she goes to her sister-in-law’s birthday in her pyjamas, or her interaction with the doctor that quickly goes off track.

I’ve been privileged to do interviews with Amy and Kate, and one gift of that was I was able to hear Amy talking about our relationship off-camera, and she was telling someone that I make her laugh about serious things. And I feel like that relationship kind of bled into this film. That’s the joy of working with Amy, who came up with all of that, and cast Josh Lucas and Katie Esertong as the sister-in-law, and Chris Messina: it was just all these wonderful people. That’s all Amy you know, putting that together. And as long as I’ve known Amy, not only is she a really, really great actress, she’s a great writer and a great producer. She does it all. It’s amazing!

It seems that the joy of the film is how unmooring it is, leaving so many questions unanswered. There are also perhaps many parallels to draw with our current experience of being in a pandemic?

That she made a movie about a mind virus spreading just as we hit a pandemic is just wild to me. And cut to you and I on a Zoom call – we didn’t even know what Zoom was months ago! Now I walk around the house with my computer open like it’s a magazine. It’s like the way I used to carry around the New York Times magazine section, and it would just end up on the coffee table or the sofa or the kitchen counter – that’s now my computer. And in it are voices coming out talking to me, like these interviews or friends. It’s just wild to me that this is how we live now. And I’m not a big fan of it, because I feel like we’re all a little lazy and, given the choice, of course I’m going to stay in bed and open my computer. But life used to require that you put on shoes and socks and get out of the house. I don’t want that to go away. And I feel like if we don’t exercise it, it will be taken away – we won’t be allowed to assemble anymore. Someone will figure out that you know, “Oh, how great to have everyone basically under house arrest.”

You know, I’m not really sure. I mean, I just think it was fun to play out with Amy, and for me to be useful for her to use. You kind of become paint; that’s how I always think of actors. I feel like actors on a set are like those little circles on a watercolour palette and good directors use a little bit of this and a little bit of that – and that’s what I felt like Amy was doing. I didn’t need to know what it all meant. My job is to react to whatever is happening like, “Oh, you know, there’s Katie looking at me and saying all these things in a very direct way to my face. How does that land if you think you only have the rest of the day to live?” I just love anything that’s about like, “Hey, everybody wake up. We’re not guaranteed tomorrow.” Even if I didn’t know Amy, and she had sent me a finished script that had anything to do with that, I would have said yes.

When I met Amy in 2008, I was watching Fassbender films compulsively, and I love them. Even when they don’t entirely come together in some kind of cohesive way, I just love watching them. He’s kind of putting this stuff together, shooting very quickly, but he’s so interesting and there’s a depth to whatever is interesting to him. Amy’s stuff reminds me of Fassbender: sometimes she will be trying to describe something to me, give me some direction, and I don’t even really know what she means, but it doesn’t matter because I respect what she’s after. And so it’s really fun and exciting to try to come up with what she needs. Not every project has to make sense – not every moment, not every film. There are so many films I love where I really couldn’t tell you what they mean.

The film has a really strong feminine energy. Is that something you felt as well?

It’s really funny because I’m not a feminist, and Amy would laugh so hard if she heard me saying that to you right now. Like, I think that’s one thing that I love about our friendship – we have very different views about things, and it actually works.

What do you hope that people will take away from the film?

You can’t control what people think, and I gave up years ago trying to persuade anybody about anything. But what I do love is the idea that maybe people will watch this and think, “I’m not guaranteed tomorrow” and have a much richer today because of it.

Have you got any other projects lined up or is it all on hold because of Coronavirus?

Coronavirus has actually been very good for me! It’s not been bad. At the beginning of it thought, “I’m gonna hike everyday. I’m not gonna sit and shiver in my bed and think that I’m gonna die. I can’t live that way.” – I kept hiking and kept talking to people. I think it’s really important for people. And in terms of other work, I’m doing a film with Channing Tatum about taking a war dog to his buddy’s funeral. It’s like a road movie with a war dog… and Kevin Nash is my husband. I won’t give anything away, but it’s a really good film. I’m very excited to be working on that at the end of September. Very cool.

Channing Tatum. You can’t get any better than that.

Thank you so much for taking the time to speak with The Upcoming. Congratulations again on the brilliant film.

Sarah, it was wonderful chatting with you and thank you so much. I’m really glad you enjoyed the film. I hope it makes you live in the day.

She Dies Tomorrow is released digitally on demand on 28th August 2020. Read our review here.

Watch the trailer for She Dies Tomorrow here: