The Legend of Moby Dick Whittington: An interview with Sleeping Trees comedy trio 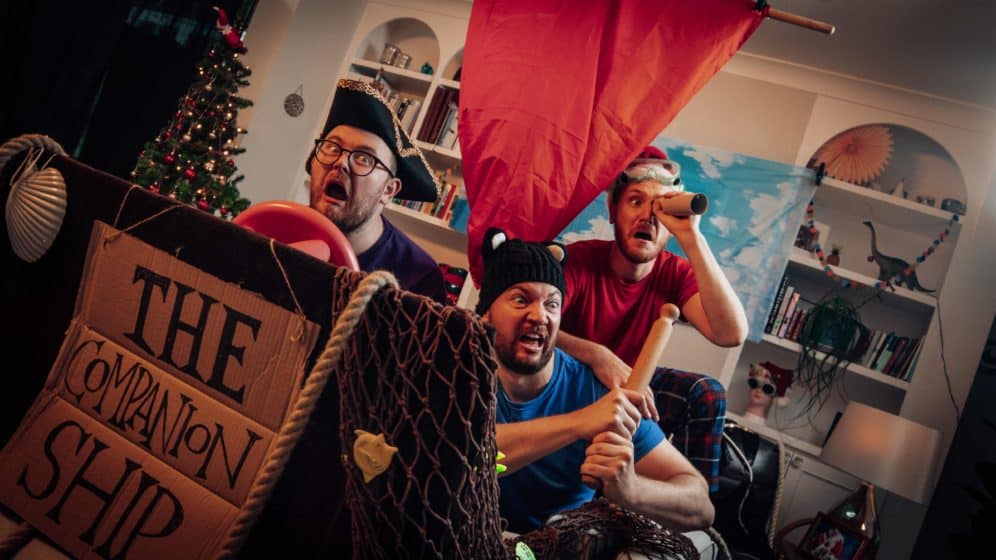 The Legend of Moby Dick Whittington: An interview with Sleeping Trees comedy trio

With Christmas drawing ever nearer, pantomime enthusiasts are no doubt wondering how theatres are going to tackle issues relating to the second lockdown and social distancing measures. Sleeping Trees, the comedy trio creators of such hits as Cinderella and the Beanstalk, are back with a panto ready to be enjoyed from the comfort of home: The Legend of Moby Dick Whittington. We found out more.

What is The Legend of Moby Dick Whittington about, and how did you first get the idea?

It was during early summertime and we had just made a pessimistic guess that our annual Sleeping Trees pantomime show wasn’t going to happen this year. Over the last six years, we have developed a strong connection with our audiences through our festive creations and people now talk about it being something of a tradition to see us live at Christmas. Well that feeling is certainly mutual, and we felt like we couldn’t let a global pandemic stop us from spreading some festive joy to as many people as possible. That’s when we entertained the idea of making a Christmas film. Then in classic Trees fashion, we dived head first into the never-ending rabbit hole of possibilities and we soon came to the decision we wanted to create an adventure kids could join in with in their living rooms at home: a living room adventure.

This benefited us in two ways: the first was that we would finally be able to heal our worsening tinnitus brought on by years of performing to screaming kids, and secondly we thought it would be hilarious to encourage kids to make a mess in their parents’ house and the parents wouldn’t be able to tell us off. Once we knew it would be a living room adventure, we had to decide on a setting – where would lend itself to a child’s imagination? The open sea! We have already tackled Treasure Island in a past live show, so Moby Dick came to mind, and it’s a story we’ve wanted to work with for a long time.

Then we had to decide on how to mash up that title with another one without being crude. Fortunately, Dick Whittington shares the name and happens to be a popular pantomime we’ve never pulled from in previous shows, and so the panto mash-up gods smiled down on us. We all looked at each other (over Zoom) and at exactly the same time said “MOBY DICK WHITTINGTON!”. In the words of Ace Ventura “Like a glove.”

What is special about Sleeping Trees’ approach to pantos?

What’s special about the Trees brand of pantomime is how things always seem to fall into place. We have a very organic writing process with the legendary Ben Hales (who co-wrote this film and the last two pantomimes with us). We are very comfortable experimenting with different ideas and are very honest with each other, which is extremely important to any writing process, because you don’t want to stamp on anyone else’s creative impulses, but you still need to maintain a level of quality control. What makes them truly special, without sounding too clichéd, is the genuine joy we have writing and performing them. The magic that is present when you add a load of enthusiastic children with more imagination than Road Dahl and less ability to censor their thoughts publicly than JK Rowling, quite literally means that anything can happen each night. I guess because we are the artistic directors, no one is going to shout* at us for veering off script, also if kids shout stuff out we actually listen to them and riff off what they say quite a lot of the time (within reason). We also proudly remain smut-free. These factors definitely set us apart from the usual pantomime. That, and we’re all exceptional dancers.

*These shows do have directors, but so far they have only encouraged us to play to our strengths and work the crowd like we would in our regular comedy shows.

Of course, the Covid-19 restrictions have had a heavy impact on theatre in general. How are you tackling the lockdown and ensuring a smooth production?

We were extraordinarily lucky with regards to the pandemic and this project’s schedule. We are lucky in general because our wonderful producer, Alice Carter, had the foresight to make the call that we should sack off “normal” Christmas early. This meant that we had decided to make a film, rather than commit to a live show in blind hope. As a result of this we secured funding and managed to film in September/October when restrictions had eased off a little. We had a small team of lovely people working on it, who were all very happy to be out of the house and doing something creative again, so we cracked on with it and (fingers crossed) it remains problem-free. That’s the good thing about a film: once you’ve done it, it’s over to the editor and hopefully people like it. Usually around now we would be in manic rehearsals getting ready for a month of 56 shows. Crazy to think we had technically finished Christmas before Halloween. The downside to this is that we will all get very, very fat.

Sleeping Trees always seem to take beloved classics and turn them into panto gold. What is the appeal of taking literary classics and mixing them in such a comedic fashion?

The key to writing a good sketch is making the audience understand the setting so that they “get it” as soon as possible. The sooner the audience understand, the sooner you can subvert their preconceptions. If a situation is universally recognisable, there is less work to be done on exposition and more room for comedy. We share this exact philosophy for writing our pantomimes: everything is seemingly familiar to an audience member, which allows us to twist and turn and play and ultimately pull the rug from beneath their feet at every chance we get. We blooming love it.

How does your writing and rehearsal process work, and has it changed through Covid-19?

The writing process is pretty straightforward. We come up with the title, followed by a rough storyline that can intertwine the mashed-up characters and plot-lines. Then after a few drafts we put it on its feet. The nature of our performances style means we like to have about 80% of the show ready by the end of rehearsals, which allows us 15% to play with the audience live in the room, creating a unique experience for people in every show. It means our audiences keep coming back and we don’t need to learn our lines properly. P.S. God knows where the other 5% is.

Who are your main inspirations?

Olly Murs has had a big impact on us. We all met in a mosh pit at one of his gigs. Crazy how things happen…

But seriously comics like Rik Mayall, Vic and Bob, Harry Enfield, and acts like the League of Gentlemen and Mighty Boosh all inspired us a lot growing up.

Was The Legend of Moby Dick Whittington conceived as a lockdown-friendly panto from the start or did it take its first steps as a traditional one?

Originally we had an idea for a live show. We would say what it is, but we will most certainly be creating it when we get the chance to do a live show again. It will be bigger, better and by far the most ambitious thing we have ever attempted. We would tell you about it but where’s the fun in that? The Legend of Moby Dick Whittington has been directly spawned out of the new way of life as we know it, but it has been a huge learning curve. It has shown us that we can translate to screen successfully, so if you’re listening Ridley…

Do you think Covid-19 will have a lasting impact on the way we perceive and engage with theatre?

We really really hope it doesn’t have a lasting effect on the arts. It has already impacted us and the industry quite severely this year, and this is a business that’s hard enough to carve a career from as it is! The only thing we’ll say is that, if anything can be taken away from this devastating blow, it is that when things return (and by Mary and Joseph they will!) we just hope people appreciate it all even more than they did before.

Despite its downsides, streaming theatre at home has proven to be successful in building on audience interaction. How will Sleeping Trees make use of the medium to make it as fun and exciting as possible?

Normally the only thing that restricts us is that we’re three chaps with minimal props jumping around a stage. On a screen anything is possible. We can tell you with great authority that us and the creative team (special mention to Kerry Frampton and Shaun Reynolds for being incredible) have truly put that to the test. If you’re worried that Christmas is not going to be as special without a panto, don’t worry, we’ve got your backs. Bath time will never be the same again.

Is there a special Christmas message you can share with our readers?

A tree is for life, not just for Christmas.

Without giving too much away, are there any exciting projects lined up for the near future?

For further information about The Legend of Moby Dick Whittington or to book tickets visit here.

Watch a trailer for The Legend of Moby Dick Whittington here: