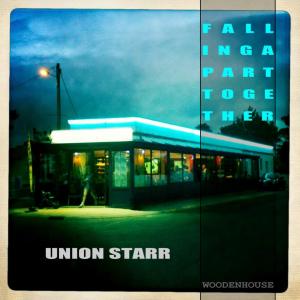 It took Union Starr trio Patch Hannan, Jason Applin and Roger Wells a painful 10 years to deliver their debut album Falling Apart Together, but finally they have enthusiastically burst back onto the scene to show off their Radiohead and Crosby Stills-inspired first effort. Falling Apart Together is out now

I Know About Art is the first single off Falling Apart Together and Union Starr are a trio who certainly know about their art. This acoustic lead number is based around the narrative of a man with a broken vision who just wanted to “make music after dark for all the nobodies,” creating a breezy four-minute track with a melancholic warmth.

The opening track, Landing Lights, is a Britpop number which oozes with nostalgic tremors of 90s pop music at its best.  This track can sounds a bit dated in parts, lacking a melodic backbone. It does however provide an uplifting release from all of today’s angst-ridden music produced by Union Starr’s contemporaries.

The gawky and sometimes clumsy lyrics are refreshing and add charm and simplicity to the album. “Here’s to mediocrity, somehow it punished me, but I don’t care.”  These words from the track Photograph may seem unsophisticated when standing on their own, but immersed in waves of care-free pop, somehow it just works.

As the album progresses there are moments when Union Starr move towards a more avant-garde style. The closing moments of A Real Fool contrast uncomfortably with the more buoyant previous tracks, an interesting device which breaks up the pattern of an otherwise sugar-coated, care-free album.  This risky move worked well for Union Starr’s inspiration Radiohead, but unfortunately Union Starr don’t quite pull it off.

Falling Apart Together is an album packed full of up-beat songs that make up the perfect summer sound-track. The songs are simply written yet glow with an endearing and eager energy. Intelligently crafted harmonies engage the listener in a romance with Falling Apart Together, sparking a fire within.

Bluebells is a relaxing track accompanied by a laid-back melody that just confirms the easy-going nature of this album, again lyrically slack but it invites the listener to fall into its arms of confident expression and reality , lifting you up in a tender embrace.

I Kept Knocking is a blend of self-assured melodies and synth-filled bedlam, showing Starr’s instrumental diversity. The guitar is always leading the way musically, and the songs are written with enough simplicity to warrant further listens. From the acoustic meanderings of Everything We Say to the more ambient electronic Don’t Worry Baby, Union Starr are no doubt very talented musicians with a passion for making captivating music.

This album has all the criteria for a successful pop album – catchy tunes, dodgy lyrics, soulful melodies and a zeal for creating an album of vibrancy. But whether for reasons right or wrong, you won’t be able to help yourself smiling when you’re listening to it. And that can’t be a bad thing, can it?

Watch the video for their track Photograph here: