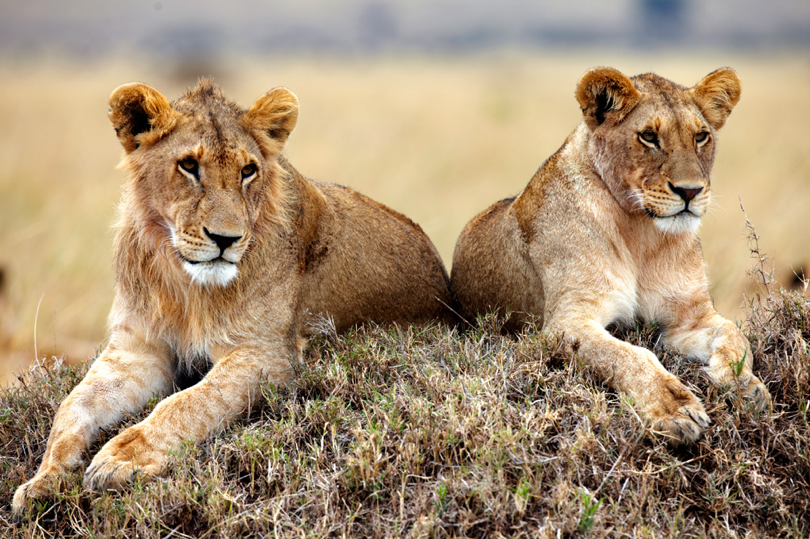 The UK premiere of Disneynature’s African Cats was held at the British Film Institute on Wednesday 25th April. The feature-length documentary (directed by Keith Scholey and Alastair Fothergill) took over two years to make and follows the big cats of the Maasai Mara region in Kenya. The Duke and Duchess of Cambridge were honoured guests at the event, which raised funds for Tusk Trust, a charity that protects Africa’s wildlife.

Before celebrating the UK release with a walk down the red carpet, the talented film-makers of African Cats spoke to The Upcoming.  Keith Scholey directed, produced, and wrote the narration for African Cats. Why did you choose the Maasai Mara for the film’s location?

The Maasai Mara has probably got the greatest density of the three cats – lion, cheetah and leopard – of anywhere I know. But also, it has got this fantastic open terrain, so you can move wherever you want and follow the animals. Also, because it has had tourism there for a long time, which you might think is a bad thing, we think it’s a great thing because the animals have got really, really used to vehicles being around. The animals are completely habituated, so if you stay in a car, you can just be a fly on the wall and you can make a movie like African Cats.

How did filming for a feature-length movie differ to making a TV documentary?

The crucial thing I think, with the cinema, is that people expect to have a really strong narrative and have really strong characters. When we set off to make African Cats, we knew that the characters had to be strong. The one thing we could control was the selection of characters. We couldn’t control the story, because that’s in their hands, but actually finding the right characters, the right mix… if you cast a film well, plot follows and so that’s what we did.

Which of the cats stood out to you as the most compelling character?

They’re very different.  I guess on one hand, with the cheetah you’re dealing with a solitary animal – a single mother who’s trying to raise cubs – and sometimes the courage of that animal is huge. On the other hand, when you’re looking at a lion, you’re looking at a social animal that has got to kind of work within the politics of the pride and everything going on and again that can lead to things. So it’s kind of hard to decide which one stands out best!

How did you balance the wild elements of the film with keeping it family-friendly?

The key thing with this story was about the narrative of how these mothers overcome the obstacles that are put in front of them. A lot of those obstacles actually don’t involve violence. They might involve fear and danger, but a lot of the key elements to actually tell the story were not not family-friendly. We didn’t want to shy away from reality though and I think the film doesn’t actually do that, but we really just focused on the elements that were most important to driving the story through. When you’re making a film about cats, obviously cats hunt a lot and kill things, but that’s not really important with their lives, that’s just what they do for the day job. The important thing is the social struggle.

What’s the main message you’re trying to communicate with the film?

The main thing is so that people actually understand that these animals are just incredible animals. They are super heroes. I think people have got no idea just how tough it is being a wild animal, like a lion or a cheetah. With luck, they’ll come away thinking that they have huge admiration and love for them. And if you do that, then you value them and if you value something, you want to keep it.

What do you think makes African Cats different to other documentaries you’ve made?

I think again, it’s mainly because it’s very character driven and very story driven. We had enough time to be able to follow the story for two years. When you do a normal television documentary, you just don’t have the resources to be able to do that. We would be able to actually be there for many, many filming days and see things we’d never seen before, but overall it was the ability to tell a story over a long time. Why did you choose to put so much emphasis on mothers throughout the film?

I think the most interesting thing in cat society – and in a lot of animal societies – is the mothers are the most interesting ones. They have the big long-term challenge. Often the males are really – I’m afraid to say – after their short-term gains, which have moments of extreme action, but in terms of the actual overall long-term struggle, are nothing like as interesting. The actual idea of having a lone mother cat, who not only has to go and hunt for food, but must also protect the cubs from everyone who’s trying to get them, is a pretty compelling story.

Was it important to you that no humans were shown throughout the film?

We wanted to transport people into the cats’ world and actually if you’re a cat living in the Maasai Mara, humans are not really an issue. They’re not part and parcel of what goes on. We wanted to take people into their world and see what happens within their world. I think if we’d introduced humans the story would have gone off on all sorts of strange tangents.

How did you come to choose Sir Patrick Stewart as the narrator?

My colleague co-director, Alastair Fothergill, had worked with Patrick before. The first Disneynature film was Earth and Patrick narrated the UK version of that. We loved what he did and we thought he’d be perfect for this movie.

Are you excited about the premiere?