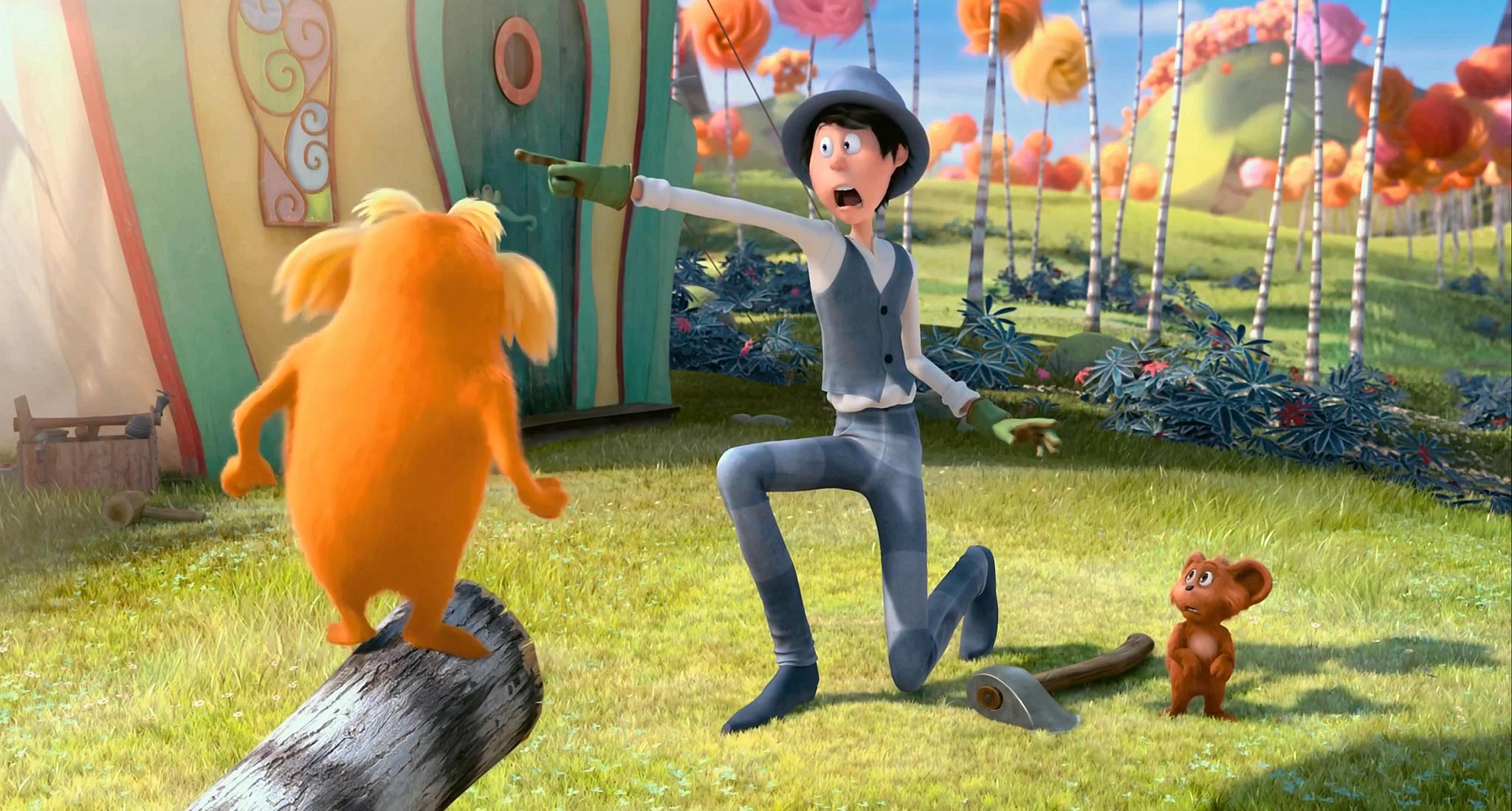 The Lorax is based on a 1972 book of the same name authored by fan of lurid colours and rhyming Dr Seuss. The Lorax will be released nationwide on 27th July 2012

The plot is a simplistic look at environmentalism: Ted (Zac Efron – High School Musical, New Year’s Eve) is a young lad who tries to win his neighbours’ affections by bringing a tree to the highly consumerist and synthetic city he lives in. To get Audrey (Taylor Swift – Valentine’s Day, Getting Interrupted by Kanye West) to fall in love with him, Ted escapes the city to find the man who knows what happened to the trees. At the same time O’Hare (Rob Riggle – 21 Jump Street, The Other Guys), an industrialist who only cares about profits, attempts to put an end to Ted’s plans.

One thing that may hamstring the British release of The Lorax is that the public will be largely unfamiliar with the source material, and so not have an affinity with the story or characters. While Dr Seuss may be a rite of passage for American children, he is less revered around the world (although that is not to say he does not have a following outside the USA).

The film is aimed squarely at very young children. There may be a few chuckles for adults but children older than infant-school age are likely to be bored by The Lorax.  The plot is too simplistic and would have been better suited to a mini-series on children’s TV. The thrust of the film is “respect nature before it’s too late,” although the plot shows that you can kill almost every tree but as long as one survives you’ll be okay. All the characters are painted with broad strokes; children will have favourite characters because they look “funny”. Anyone old enough to pay to get into the cinema will find it hard to care if the denizens of Thneed-Ville die in an environmental catastrophe.

The visuals are very poor. The colours are retina-searingly bright and the 3-D looks like someone is throwing Skittles at your eyes. The aesthetics follow the ideals of Dr Seuss’s wacky illustrations with otherworldly fauna and twisted architecture, and as such fans may delight in the visual field of The Lorax. One thing that really doesn’t seem to work though are the trees, the central plot device of the movie. For a movie that is preaching the wonders of nature it seems an odd choice to make the trees look like a homogenous group of putrid, neon candy-floss on sticks. This may be following the aesthetics of Dr Seuss but if the countryside looked like this in real life, it would deserve to be torched.

In terms of narrative structure, The Lorax has one major flaw. Halfway through the film we switch from watching Ted’s story to that of the Once’ler (Ed Helms- The US Office, The Hangover). This foray into the Once’ler’s back-story kind of deflates Ted’s quest and I’m sure that young children (i.e. the target audience) may become a little irritated or lost. The songs pale in comparison to those featured in Disney films and feels like a kick when compared to the delightful melodies in the The Muppets. “My name’s Wesley, My name is Rose, And we’ve got a son that glows,” is excessive for anyone older than five.

Most of the major problems with The Lorax stem from the fact that its source material is aimed at extremely young children and these kind of stories are better in short form. The voice acting is done to a high enough standard with the best performance coming from Danny DeVito as the eponymous Lorax. There are even some funny gags in it. The problem is that it does not look good, the songs are disappointing and the plot could fit on a matchstick.

The Lorax may do big numbers at the box office, especially in the US, but one would assume world-wide as well. The issue is that when you have amazing family films like The Muppets, Finding Nemo or even Brave (released around the same time) why would you go and watch The Lorax?

Watch the trailer for The Lorax here:

Bury Tomorrow rock the Underworld and answer our questions before going on stage | Live review
Don’t Stop Till It’s Over, The Temper Trap play at Somerset House | Live review