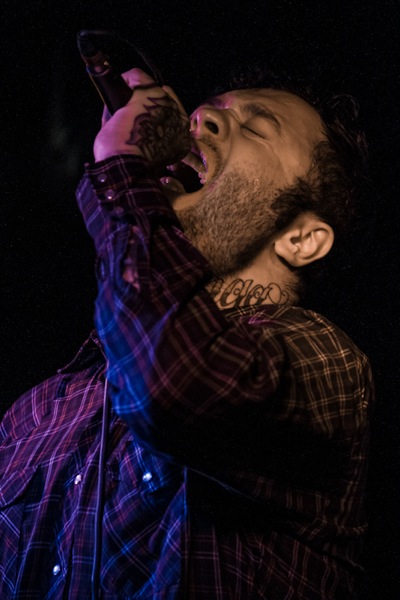 The first band on the bill is Southampton rockers Burn the Fleet. Their set is jam-packed with tunes both old and new, with frontman Andrew Convey’s banter filling the slightly awkward gaps between songs. Convey’s melodic singing mixes well with the crashing drums and powerful guitars, but at times it does feel like the songs are slightly repetitive. Being the first band on is never easy and tonight was no exception, but Burn the Fleet perform with enough vigour that you can imagine a packed venue in front of them and the audience who turn up late most definitely miss out. Next up are London quintet Adelaide. They’ve had a busy year, with a new line-up, and are currently doing the festival circuit this summer, including Hevy festival and Download festival. Their new vocalist Sam Storey takes a while to get into the set but after a few songs, he is confident and performing perfectly. For a band that changed their line-up only a few months ago, they sound impressive together. Playing a mixture of new and old songs, Adelaide’s set finishes with everyone’s foot tapping and the trains out of London will be filled with people humming their tracks.

Scottish band Flood Of Red are up next, and their set takes everyone by surprise as singer Jordan Spiers’ voice soars above the crowd and meets with the heavy, crashing instruments. This band has not one, but two drum kits on stage which means that the drum beats are loudly defined and ring out through the venue and onto the street above. Their set starts rather carefully and almost tentatively with quite a slow song, but the pace quickens and the audience is sad to see them leave the stage.

The headline act, Night Verses, follow soon after. They hail from the States and have only been together a short while. This is evident from their live show, as even though the music is complex and technical, it’s just not delivered right. Frontman Douglas Robinson doesn’t seem to know what to do in between the staccato drums, the intense guitar riffs, and his screaming, visceral vocals. He thrashes around the stage, but the rest of the band doesn’t seem to feel his energy as much. The songs themselves are good, very good. There’s just something onstage that doesn’t seem to flow very well. However, it has to be remembered that Night Verses have only been together a very short while and there is a lot of potential here, and it’s definitely only a matter of time until they seize it and perform an impeccable live show.

Listen to Be Happy With Yourself, I’m Staying Here In Hell by Night Versus here: