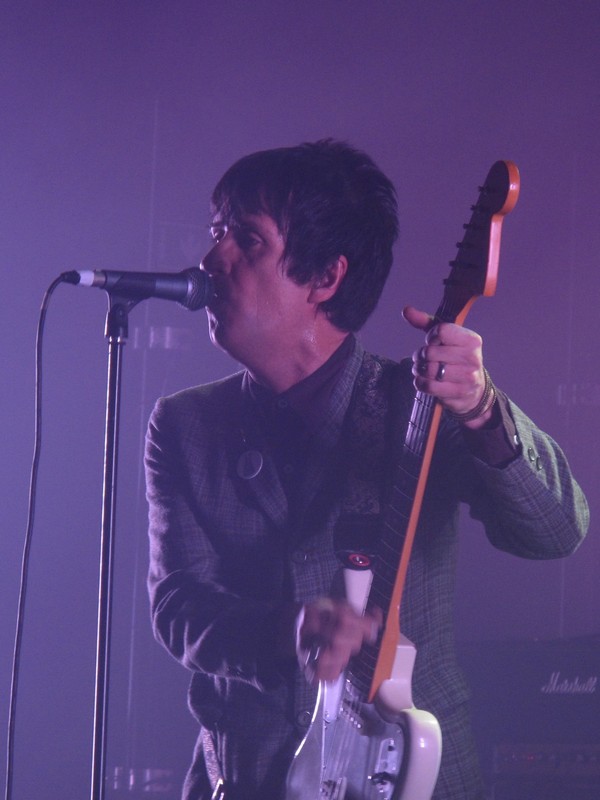 Widely revered as a bona fide musical great and industrious beyond compare, Johnny Marr cannot miss a beat, because he is the beat. He is the musician’s musician, and he’s untouchable. As natural as breathing, Marr walks onstage to flashing lights and crashing guitars that build palpable excitement across the already awestruck London audience. With unparalleled stage presence, he launches into The Right Thing Right – opening track from his first (and quite brilliant) solo album The Messenger. A man of compact stature, Marr’s energy and control are a wonder to behold: an unstoppable missile of innate passion wrapped neatly in a tweed blazer, trademark black drainpipes and Teddy Boy lace-ups, barely breaking a sweat beneath his impenetrable cool.

It takes a special level of both self assurance and selflessness to not only play but sing songs from a band that you haven’t worked with for 25 years. Stop Me if You Think You’ve Heard This One Before was bestowed with powerful ease, showcasing Marr’s ability to keep the ghosts of The Smiths alive without compromise or saccharin nostalgia. Current single Upstarts kept momentum as a post-punk paean of youth and revolt. It’s a theme that runs throughout his career, evidenced especially in the softer track New Town Velocity, which recounts the time he “left school for poetry” – and thank God he did. Smiths b-side London had Marr strumming with a precise fury and creating a mischievous rapport with the audience. Getting Away With It (from his time as guitarist with Electronic) showed his diversity, adding a pop sensibility amid a deliciously guitar-heavy set.

Periodically armed with Rory Gallagher’s Stratocaster, Marr sailed through new songs Lockdown and I Want the Heartbeat like the shining ringleader he is: utterly stoic and relaxed without a hint of cockiness, flicking the mic lead for function, not flare- this is business, this is how it’s done. With a sing-a-long encore of Smiths psalm There Is a Light, Marr left the stage having given himself totally. A timeless, living, breathing example of what it is to be a rock star. He is still the messenger, and he is Marr-vellous.

Watch the video for Upstarts here:

Original recipe of the week: Coriander Cajun spiced mixed nuts
The Magic Band at Under the Bridge | Live review