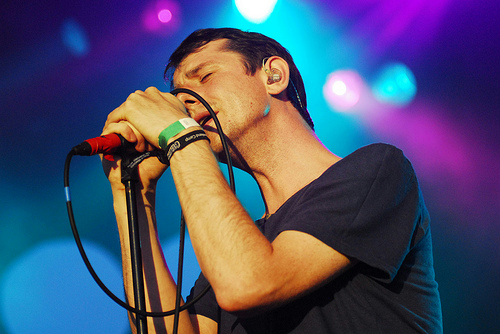 There is no apparent reason why bands The Twang and Cast have decided to endeavour on a co-headline tour. Cast are a four-piece from Liverpool, The Twang a five-piece from Birmingham. Cast are rock veterans who formed back in 1992 from the ashes of bands The La’s and Shack, whereas The Twang have been here since 2001, a nine year gap. Yet somehow on stage these differences don’t matter and the decision to tour together seems brilliant.

The Twang are the first act. Now on their third album, the group found initial success from their 2007 single Either Way, a song which when played tonight is received with a roar of delight from the crowd. A feedback problem makes the track quite hard to hear, but the charisma from singers Phil Etheridge and Martin Saunders overshadows this.

However, after a while it becomes apparent that Saunders doesn’t have a real part to play in the performance. Whereas Etheridge is the main vocalist, Saunders just seems to drunkenly stumble across the stage, occasionally adding backing vocals. It could be said that he is more of a hype man than an actual contributor to the band. Nonetheless, his energy transfers into the crowd who dance along throughout the set.

When Cast come on, the differences between the bands are really noticeable. The large group of young men in checked shirts at the front during The Twang have been replaced by an abundance of polo shirts and bald heads. Instead of jumping and moving around, they casually swayed to the songs, as if they were just reminiscing about the first time they heard Cast. Only a handful of songs including Sandstorm from their first album and Flying really get the crowd moving.

However, frontman John Powers’ vocal ability puts the previous band to shame, as do the songs themselves, which are of a high quality and sound as good as they did two decades ago. The only similarity between the two acts is their drummers: both are full of energy and really go for it on stage.

Overall this show has proven two things: firstly, that The Twang have got a lot of life left in them after 12 years, and secondly, Cast still know how to put on an amazing set.

For further information about The Twang and Cast’s co-headline tour visit the ticketing website here.

Watch the video for Either Way here: