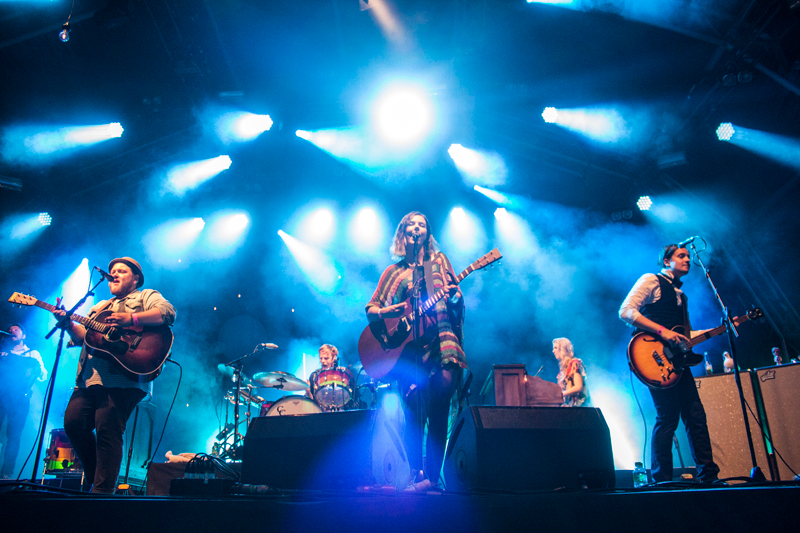 “We’re going to take you to the Icelandic summer,” smiles co-singer and guitarist Nanna Bryndís Hilmarsdóttir before beginning to play Lake House, when suddenly the late afternoon sun breaks over a dreary V Festival as if on her command.

Last year, Of Monsters and Men’s debut My Head Is an Animal made the number one spot internationally and in the UK Albums Chart top ten, while its lead single Little Talks followed in a similarly successful fashion. Having already played Coachella, Bonnaroo, Glastonbury, T in the Park and Optimus Alive! this year, it is hardly a surprise that the band receive an overwhelming crowd response, taking the lead as one of Saturday’s most interesting acts.

The 4Music stage is certainly not the most intimate of settings, but the five-piece created an inviting atmosphere, charming the audience with their natural warmth and humility. Hilmarsdóttir’s every word of gratitude is said with such genuine awe that all are completely enchanted – her playful interactions with the crowd as well as the rest of the band demonstrate their collective enjoyment of the performance.

The fans mirror this, responding to the band’s light-hearted nature by clapping along dutifully to Slow and Steady, dancing to Mountain Song and singing along to Love, Love, Love and the acoustic harmonies and crescendo-ing final chorus of Little Talks.

In reality, it is Of Monsters and Men’s ability to bring together insightful lyrics about everything from love to insanity with addictive melodies that sets them apart from other bands of the same genre. Their uplifting sound is what makes them the ideal festival act and they are surely set for great things with a new album due post-summer.