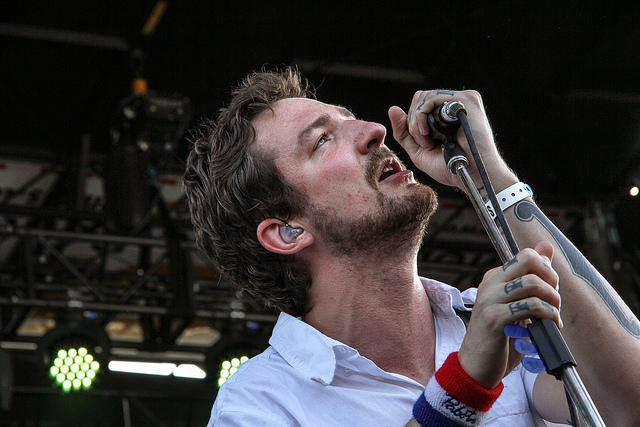 Returning to Reading after a two-year absence, Frank Turner and his band The Sleeping Souls brought a joyful and gutsy show to the main stage at Reading Festival. A minimalist set, backed by a banner for his recent album Tape Deck Heart, belied Turner‘s showmanship. Playing a cross section of material from his five studio albums, Turner’s limited range of movement didn’t prohibit him from carousing the audience through a set that was by turns frenetic, mournful and uplifting. Taking the stage in a wheelchair (a nod to both Kurt Kobain’s entrance at this very festival in 1992 and his own ongoing back problems) Turner was soon up on his feet and the crowd joined him. Four Words was a very well-received opener, and atheist anthem Glory Hallelujah was a rabble-rousing sing-along of epic proportions. It takes an artist of Turner’s calibre to craft a song denouncing the existence of a higher power that is moving and inspirational rather than snide and aloof: perhaps Richard Dawkins could do with taking a note out of the Wessex-born songwriter’s book.

Turner’s voice has a throaty, gruff quality to it that the studio seems to fail to capture, and he belted his tunes with a raw energy only possible at a live performance. His injuries prevented him from playing guitar – a duty that was passed to a new band member playing only his second gig with the Sleeping Souls. This almost seemed to help rather than hinder the act, freeing Turner up to focus on his vocals and indulge in playful repartee with the assembled fans.

The tumultuous harmonica-fuelled climax to Wessex Boy would have been a fitting end to any gig, but there was more in store. Turner readily indulged in frontman clichés (espousing the unity of festivals, getting the crowd to sit down before leaping up at the chorus) but he did so with such sincerely that you couldn’t help but be won over. Anyone who may have written Turner off as another Sheeren-esque singer/songwriter would have been firmly put right by rock ‘n’ roll-endorsing anthem I Still Believe and fan favourite Photosynthesis, which closed the charismatic set.

Magnanimous to the end, Turner expressly introduced each of his backing band in turn, and wholeheartedly thanked the crowd for “taking time out of their day” to join in the revelry with him. Judging by the grins plastered on many faces as they trudged back to the campsite, the appreciation was very much mutual.

Watch the video for I Still Believe here: