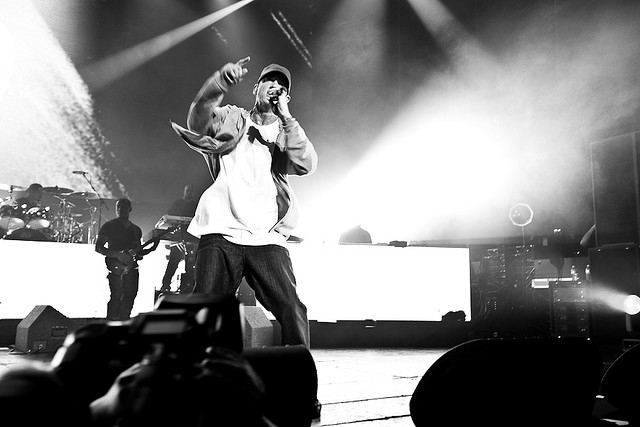 It seemed as if the entire population of Reading Festival had trudged from their rain-soaked campsite to watch Detroit-born rapper Eminem take to the main stage, and they were certainly not disappointed. The show was boisterous and energetic, and neatly spanned Eminem’s lengthy career.

Considering the wealth of well-loved songs he had to choose from, opening with brand new track Survival was a bold choice, but Mathers had clearly put a lot of thought into his setlist. Several songs in, it was announced that the remaining tracks, with the exception of those from side project Bad Meets Evil, would all come from The Slim Shady LP, Marshall Mathers LP, The Eminem Show and Recovery. The latter of these is his most mature material to date, marking an exceptional return to form following two albums that left critics and Mathers himself decidedly unimpressed (to quote the rapper: “F*** my last CD, that s***’s in my trash”).

While he could have relied solely upon material from the twisted mind of malevolent alter ego Slim Shady, he used the tail end of the set to present a microcosm of his career: My Name Is (the introduction of Slim Shady) was followed by The Real Slim Shady, charting the emulation that success brings. Next came Without Me, which gleefully indulges the Shady character while also admitting his frustration with being pigeonholed. To top it all off we got uplifting anthem Not Afraid, where Marshall overcomes his demons and leaves Shady behind. The ensuing instrumental demonstrated that his musical production has matured along with his lyrics.

Eminem bounded around the stage with a vibrant energy throughout, hands sawing the air as he delivered his unmistakable lightning-fast verses at impossible speed. He left the majority of the rabble rousing to his hype man, Mr Porter, who  certainly did his job. Although cynics may have noted that the response to “Who here is really fucked up?” was considerably more vocal than “Who here is a real hip-hop fan?”, the crowd were on board from first to last. The appearance of Dido for the choruses of Stan drew a cheer, but the loudest shout of the night was reserved for coaxing an encore out of Mathers and his backing band, and when the inevitable intro to Oscar-winning hit Lose Yourself began, the arena erupted.

Much more than a rehashing of his greatest hits, this was a performance that reminded us of why Eminem is a star, and leaves fans eagerly awaiting his next album.

For further information about Eminem and future events visit here.

Watch the video for Lose Yourself here:

Any Day Now: A Q&A with director Travis Fine
Keane at Live by the Lake | Live review