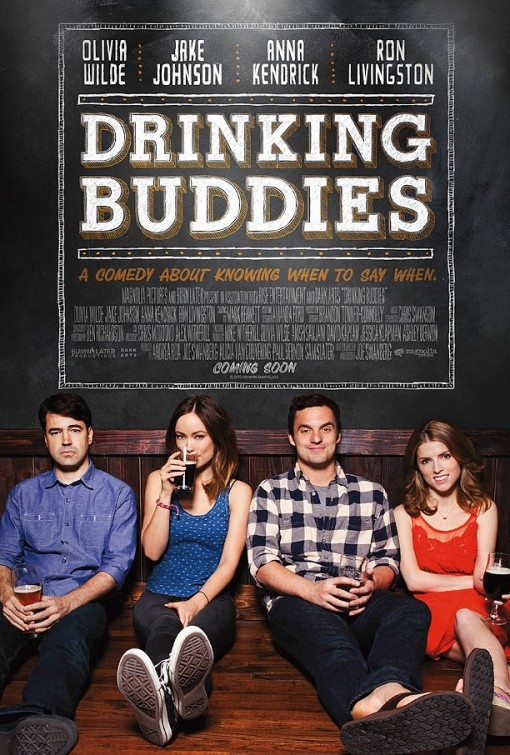 Anyone who has followed the popular TV show New Girl and delighted in Jess and Nick’s will-they-won’t-they chemistry will be thrilled to see the actor Jake Johnson playing out a similar relationship in Drinking Buddies. In his latest film, director Joe Swanberg combines his own love of craft beer with the ever-popular rom-com. Kate (Olivia Wilde, House M.D.) and Luke (Johnson) are friends and co-workers at a brewery, bonded by their mutual love of beer. Their friendship is perhaps more intimate than most, but anything more is off-limits as Kate is in a blossoming relationship with the refined Chris (Ron Livingston, The Conjuring) and Luke is on the brink of planning his engagement to long-term girlfriend Jill (Anna Kendrick, Pitch Perfect).

Famously, Swanberg had his cast improvise the film’s dialogue in its entirety. While this was likely daunting in production, it works surprisingly well on screen. There are no speeches cleverly designed to insinuate a character’s inner thoughts, and this actually challenges the actors to achieve this instead with their performances. It is certainly one that pays off, which speaks for Swanberg’s talent and innovation as a director. All four of the stars (who make up the two central couples) come across as very genuine and relatable. What’s more, their performances are on par with one another. The aptly named Wilde is enchanting as Kate, a deflective and vulnerable party animal. Johnson is warm and funny as a loyal if flirtatious Luke. Meanwhile, Kendrick and Livingston are similarly wonderful, each playing comparatively quiet significant others but with a tension that suggests underlying feelings and doubt.

Of course the film does have its bumps and snags, mostly in the form of the cynical questions it will inevitably raise: how does Kate chug multiple pints every day and stay so svelte? How do she and Luke get away with drinking on the job? However, this film is so frank and subtly funny that it can afford to ask for a little suspension of disbelief from its audience. This is a unique, fun movie with a satisfying take on those complicated romantic relationships.

Drinking Buddies is released in the UK on 1st November 2013.