That Face at the Landor 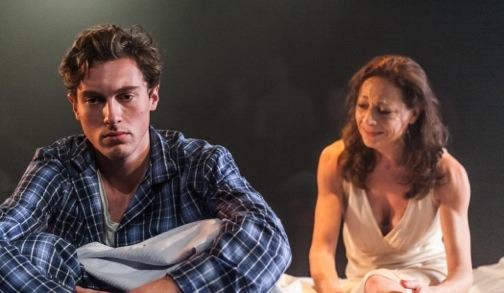 That Face at the Landor | Theatre review

Not unlike Zoe Heller, who for her own sharp chronicle of the London middle classes added a tangy Waugh-ish conservatism, Polly Stenham borrows premise and cut glass one-liners from Noel Coward for her first production. The tragedy in the bed, mad mummy and the artistic son are lifted from The Vortex, though Stenham has slyly turned the tables by revealing Henry, his mother’s keeper, as straight. Their ménage is orbited by a sister at boarding school (a limited role, depicted with disciplined energy by Samantha Hyam) and a long-absent father (Tom Donnelly). Their dim lives are interrupted by a doped up lesbian torture scene (smacking of Heller in its bolshie response to left-liberal gentility), which brings Dad home like a fury from abroad. We watch as Martha/Mother (a whinger of biblical proportions, the show’s standout role played to absolute perfection by Caroline Wildi) sings the song of the damned, as Henry takes on her sins as payment for his mauled childhood and Dad, whose character doesn’t quite get the breathing space he requires, passes judgement on all and is judged in turn.

A gruesome chorus of daughter Mia and comatose Alice look on. One of the essential roles in this play is that of Izzy, a devil-may-care Coward monster, who orchestrates the school dorm initiation.  One hopes she will end up like Martha, but one sees in Georgina Leonidas’ delightful performance that she has too much spit and gumption to crumble. It is Henry, kicked during a life down as victim to Izzy the succubus, who must fill that role.

The play is cold and cruel. It is a minor blemish that director Tara Robinson occasionally leans on one-liners for an easy laugh when the play should make us laugh in spite of the fact that life for these characters is, as Waugh said, “a blow expected, repeated, falling on a bruise…only a dull, sickening sensation”.  Those lines are punctuation in the misery, so should not be over-emphasised. The play is intensely climactic; what one remembers is the imagination of all those sick and wasted years – that face at infancy, at birth, that face at the beginning of romance.

That Face is on at the Landor Theatre until 1st December 2013, for further information or to book visit here.