Thirty Seconds to Mars at the O2 Arena 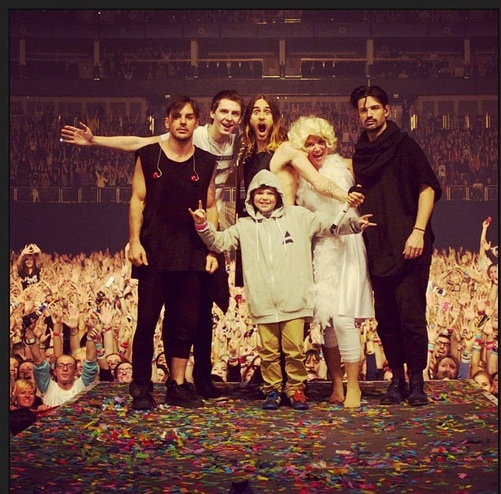 Thirty Seconds to Mars at the O2 Arena | Live review

On Saturday 23rd November, after the excellent You and Me at Six as their opening act, Thirty Seconds to Mars finally came to London for their Love Lust Faith Dreams tour. To a packed sold-out house at the O2 Arena, with or without the help of any acrobats, confetti and maybe pre-recorded strings, Leto owned the stage with his drive and energy, rightly commanding the crowd from the onset: “Unless you are a grandmother or a grandfather, stand the f***k up, and jump, jump, jump, jump!” His passion and talent are unquestionable.

In the middle of the set of a gruelling world tour, it is no wonder the drummer disappeared. Shannon Leto, shyly requested by the crowd at the time of the Instagram picture-taking moment, was nowhere to be found for a few minutes.

Why, oh why, does Jared Leto, rock chart-topper extraordinaire – so the rules had to be changed on the modern rock billboard charts as no band henceforth can remain in this chart for longer than a whole year running, since The Kill set the precedent – voted one of the best looking people two years running, actor of many talents, film director, belter of the biggest emo anthems of the beginning of the 21st century, thinks he needs anything more than what he already gives and receives from a following crowd 21,000 people strong?

That band is already something special. Jared, Shannon and Tomo Milicevic set new standards, by reaching out to their loving fans, “crazy people” who Jared will call on stage, as if he hadn’t noticed that every single soul in the house was already on his side, as well as fellow artists. Damien Hirst designed the cover of their latest album; the huge balloons that descended on the crowd were a colourful and happy gimmicky reminder of it, within the powerfully dark set. Like the video of City of Angels, which has moved many of us with its lost souls and fame-hungry entities exposed bare, the rendering of Closer to the Edge on an acoustic guitar was melancholic and touching. Thirty Seconds to Mars could get the emo out of anyone.

Just make sure Shannon is attached to some lead or wire, so you don’t lose him.

For further information about Thirty Seconds To Mars and future events visit here.

Watch the video for The Kill here: