Let the Right One In at the Apollo 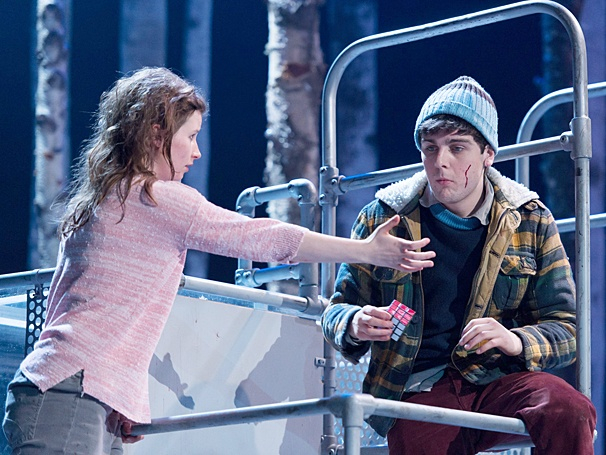 Let the Right One In at the Apollo | Theatre review

Let the Right One In follows Oskar, a young boy living in a small, snowy town near the woods. Multiple killings have taken place in the forest and the population of the town is tense. When Oskar takes to the woods to get away from bullies at school, he encounters an odd girl named Eli. Her appearance is different from other girls, but Eli and Oskar begin a friendship that later turns into something more. However, it is Eli’s secret of what she is – a vampire – that creates the greatest obstacle for the pair. The stage performance, led by Rebecca Benson (Eli) and Martin Quinn (Oskar), is warm and sweet with a quirky dialogue that makes the audience burst into laughter several times. However, the play itself is, in some ways, very dark and discusses subjects such as rejection, jealousy, bullying and alcoholism. Let the Right One In is also graphically and psychologically brutal. The killing scenes do not spare viewers the bloody details and the bullying is painful to watch.

Benson convincingly plays the part of Eli, and successfully manages to deliver a sense that she is not entirely human. Her speech and body language are awkward and strange, but the character still captures the compassion of the viewers. Although an animalistic killer, she is also just a fragile little girl who falls in love with a boy. Benson is not afraid to look beastly and terrible on stage, and this is possibly what makes the performance even more convincing.

The play is based on Swedish writer John Ajvide Lindqvist’s novel, and it is interesting how the origin of the story is hinted at through props: for example, in the candy shop they only have Swedish sweets. It is these small details and the quirky dialogue that make the gruesome aspects bearable, and the combination of the two creates just the right mix of terrible and lovable to enrapture the audience. This is a different take on the vampire trend that will hopefully be very successful. It certainly deserves to be.

Let the Right One In is on at Apollo Theatre until 27th September 2014, for further information or to book visit here.

Watch the trailer for Let the Right One In here: