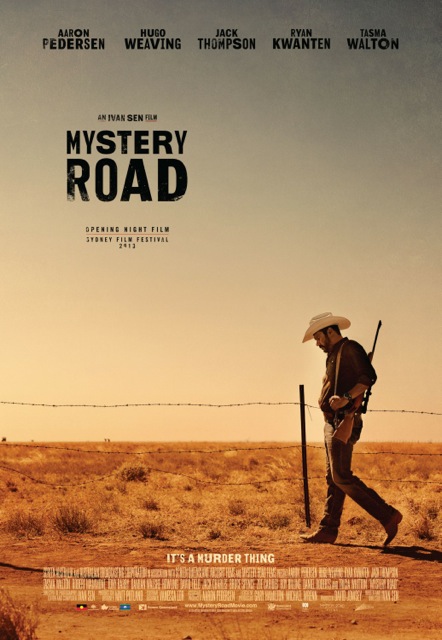 With names like Slaughter Hill and Massacre Creek, the rural town of Winton in Queensland, Australia was never going to rank highly in “best family destinations” on TripAdvisor. Thankfully, Mystery Road has far more redeeming qualities other than its curiously named holiday spots, and the Australian outback is a marvellous and truly singular setting for this slow-burning neo-Western. While the dusty and barren landscapes somewhat echo the small-town anonymity of No Country for Old Men, Mystery Road arguably has far more in common with Roman Polanski’s Chinatown. Although the two films appear to be widely different on the surface, both actually tap into similar feelings of desolateness and feature unwavering moments of hopelessness, anchored by solid lead performances that are strong enough to carry the whole film.

In Aaron Pedersen, director Ivan Sen is gifted with a determined and brilliantly engaging leading man. As the only Aboriginal detective on his tiny, shrewdly racist police force, he sets out to find the killer of a local Aboriginal teenage girl, which sets the story in motion and establishes the strained ins and outs of indigenous Australian culture. When it becomes clear that nobody on his team is really interested in finding the young girl’s killer, it is of course left to Pedersen to unravel the mystery and try to restore a little order to his small town.

Even though Pedersen delivers a fantastic lead performance, Ivan Sen is the true star of Mystery Road. Acting as the film’s director, writer, composer, editor and cinematographer, Sen uses all of his behind the scenes roles to create a unique, simmering atmosphere and a visually striking ode to old-school westerns. A highly talented tour-de-force, he manages to successfully tell a story with important, worthy issues about the treatment of Aboriginal people and their culture without making it seem too forced.

Dirty, honest and highly affective, Mystery Road is a superb Australian thriller and a welcome addition to the neo-Western sub-genre.