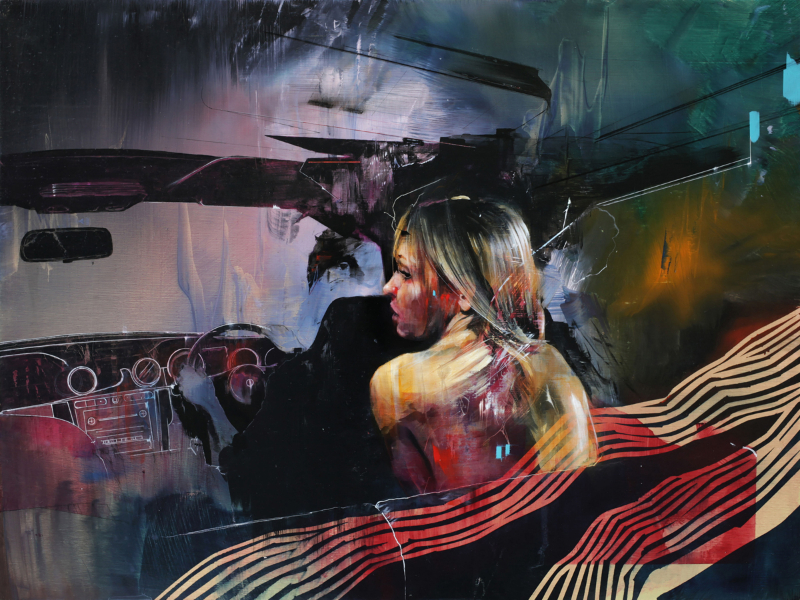 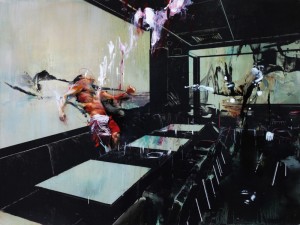 imagined. Youngish adults, perhaps wearing elements of costume, merge into reality or abstraction, part of a story the viewer fills in. The works are assured and painterly, and also show the influence of photographic and digital images. The artist creates a spontaneous feel, making the accuracy of the figures expressive by leaving paint raw on the surface.

Ian Francis graduated from an art and illustration degree in 2001, and has since produced a considerable body of work. There is little to be found in terms of what he has said about his ideas or his research, but the paintings speak for themselves, and are striking and likeable. The scenarios have a retro 1980s aesthetic going on, like life in a glossy film – perhaps an imagined version of reality.

The figures almost float, as if they are falling into the threshold between paint and photography, and overall the paintings read like very considered moments in time. A man in a black and chrome diner seems to emerge from or fall into a background painting: we get a sense of his bodily feeling as if it is our own dream. In another painting a girl sits in a car. We are not sure if the snapshot is benign or dangerous, but threatening colours flash in an oppressive sky.

An art exhibition is a chance for a gallery to create a setting for work and to show it to its best advantage, and so it was rather a surprise at the opening that there were so many distracting elements to compete with the art: a late start; a radio station playing; a lack of information; a pink neon light to indicate downstairs that glows unflatteringly onto an artwork. Perhaps this casual attitude was an off day for the gallery, but thankfully Ian Francis’ paintings are appealing enough to win over the competition of unfortunate presentation.

Endless Summer is on at The Outsiders Gallery from 5th September until 4th October 2014, for further information visit here.