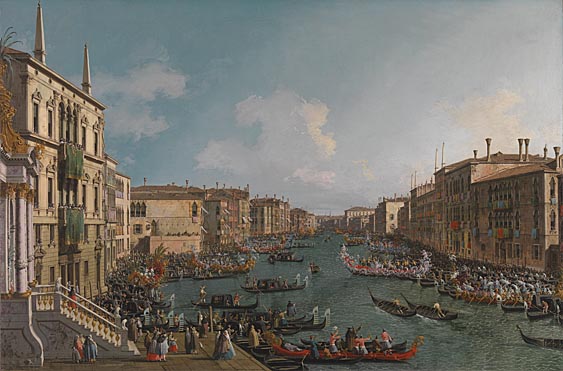 In March 2015, a much-loved work from the National Gallery Collection – Canaletto’s A Regatta on the Grand Canal – is going on the road and travelling the UK as the second painting in the three-year Masterpiece Tour. The three host venues for 2015 are the Victoria Art Gallery, Bath; Compton Verney, Warwickshire and Sunderland Museums and Winter Gardens.

The Masterpiece Tour is part of the National Gallery’s commitment to promote the understanding, knowledge and appreciation of Old Master paintings to as wide an audience as possible. This opportunity to bring hugely popular National Gallery paintings to the public’s doorstep is being made possible by the generous support of Christie’s.

A Regatta on the Grand Canal (about 1740) by Canaletto depicts the annual carnival regatta in Venice, as some of the figures in the foreground wear the “bauta”, a costume of white mask and black cape which was typically worn during the carnival. The painting shows the one-oared light gondola race.

This painting is a companion piece to Canaletto’s Venice: The Basin of San Marco on Ascension Day of the same date, both paintings have been part of the National Gallery Collection since 1929.

The first stop on the tour will be the Victoria Art Gallery in Bath. Bath’s Victoria Art Gallery welcomes around 100,000 visitors a year to view its lively temporary exhibitions and diverse collection displays, from Turner to Grayson Perry and Hugo van der Goes to Howard Hodgkin.

18th century Bath was a popular tourist destination, with its hot spring water and fashionable architecture.  Just like in Canaletto’s Venice, wealthy visitors were enthusiastic purchasers of paintings and prints of the city as reminders of their travels.  It will be displaying a selection of Bath views alongside Regatta on the Grand Canal, looking at Canaletto’s influence on British art and the 18th century enthusiasm for view painting.

Stephen Bird, head of Heritage Services at Bath & North East Somerset Council, says: “We are absolutely delighted that the Victoria Art Gallery in Bath has been selected to host Canaletto’s A Regatta on the Grand Canal as part of the Masterpiece Tour programme.”

The next stop on the tour is Compton Verney in Warwickshire, a nationally-accredited museum and gallery with six diverse permanent collections and frequent international exhibitions all housed in a Georgian mansion with a large modern extension set in 120 acres of historic “Capability” Brown parkland.

The display will also (until 7th June 2014) coincide with Compton Verney’s major exhibition Canaletto: Celebrating Britain, which looks at Canaletto’s reaction to emerging British identities in the years of the artist’s visit to these shores of 1746-55 – a context which will encourage visitors to compare burgeoning mid-Georgian Britain with the picturesque decay of Canaletto’s Venice.

Dr Steven Parissien, director of Compton Verney, says: “Compton Verney is delighted to have been chosen as a partner in the Masterpiece Tour for 2015, a collaboration which builds on our already strong programming links with the National Gallery and which underlines for our regional audience our ability to bring major artworks to their doorstep.”

The final venue in the Masterpiece Tour is Sunderland Museum & Winter Gardens. Sunderland Corporation established a museum in 1846, the first public museum to be funded by a local authority outside of London. It re-opened after an extensive HLF funded refurbishment programme in 2001 with eight new galleries.

In 2016, Rembrandt’s Self Portrait at the Age of 63 will join the final stage of the tour bringing the trio of annual tours to a close. Each annual tour runs from January to July and visits three different regional museums per year.

Dr Nicholas Penny, Director of the National Gallery, says: “The National Gallery was created for the benefit of the British public, but it must be acknowledged that a number of visitors may find it difficult to come to London. We hope that the tour of this great Canaletto masterpiece will reach people who have never visited their national collection or haven’t done so for ages, and we hope that many of those whom we do reach then feel inspired to visit or revisit. We are delighted to include these three venues in the Masterpiece Tour 2015 and look forward to seeing the different ways in which this much loved painting will be displayed in each setting.”

Steven P Murphy, Chief Executive Officer, Christie’s, says: “We all want to see as many people as possible encounter, and enjoy, art. Christie’s has long supported regional and national museums to help make that possible, and we are especially honoured to support the Masterpiece Tour. Canaletto is a painter of significance, depth and pleasure. Nothing beats getting up close to a work of art and I’m delighted we are helping people in Bath, Warwickshire and Sunderland do just that with this masterpiece.”