Imelda May at the Shepherds Bush Empire 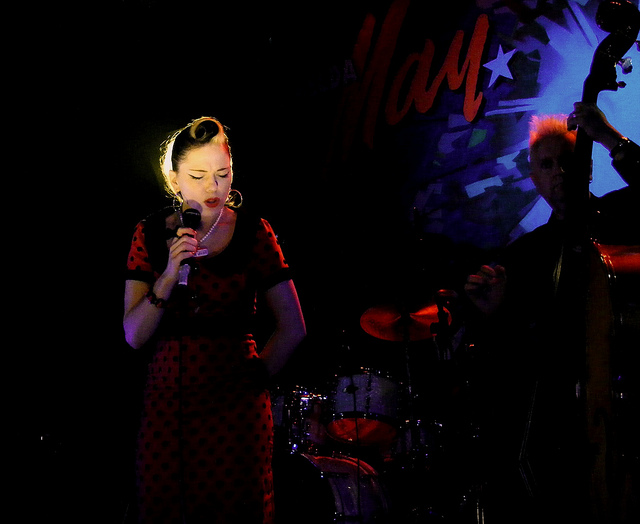 Imelda May at the Shepherds Bush Empire | Live review

Having released four albums and enjoyed performances on Jools Holland, along with televised performances in the US, Irish rockabilly singer Imelda May has amassed a solid following. On the 24th of November we stopped by the Shepherds Bush Empire to watch her perform on her latest tour, in support of her newest LP, Tribal.
Imelda May’s live sound is built around the interplay between her and guitarist Darrel Hingham. Her powerful voice, which has a tendency to turn into a growl when holding a note, is the perfect counterpoint to Hingham’s crystal clear guitar. Indeed, throughout most of the night Hingham threatened to steal the spotlight from his bandmate and wife. His guitar lines and frenzied solos were played with the sort of confidence that only comes from years of touring. His tone is clear with no reverb or delay added, giving it a sharpness that effortlessly cuts through the band. May’s band operates with a careful, workmanlike precision; each fill, solo and vocal flourish is considered – it’s clear that the band have been playing together for a number of years now. Unfortunately the gig seemed to get considerably sterile after a while, as songs would too often follow the same structures, with only small differences.
May is at her best when the choruses in her songs are packed out with as much instrumentation as possible. Here, the best example was her dizzying performance of 2010’s Mayhem, which featured verses that suddenly exploded into a cacophony of brass and heavy guitar riffs. She ended her set with a particularly nuanced version of Cher’s famous Bang Bang (My Baby Shot Me Down). It was a welcome change of pace, and put her vocals front and centre where they really shone.
Imelda May does rockabilly very well: she has a dedicated fan-base who adore her for it, and seeing her live, it was hard not to get caught up in it all. Halfway through her set she played It’s Good to Be Alive and turned the chorus into a call-and-response with the audience. Her mini speech that followed ended with “We are all going to die so we might as well enjoy life” – and the audience let out a huge cheer. At the Shepherd’s Bush Empire this week, they certainly took her advice.
★★★★★
Prajay Ghaghda
Photo: Man Alive
For further information about Imelda May and future events visit here.
Watch the video for It’s Good to Be Alive here:
Related Itemsdarrel hinghamfiftiesfolklive musicmusicreviewrockabilly