Taken at Midnight at the Theatre Royal Haymarket 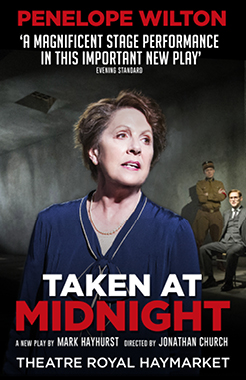 Taken at Midnight at the Theatre Royal Haymarket | Theatre review

All of us know the statistics: the unimaginable number of people who met their end in Nazi concentration camps. When faced with such horrific figures it is sometimes difficult to remember that each of those lives had a story and each of those lives had loved ones left behind. Taken at Midnight is an emotional and gripping exploration of one of these tales. Following its sell-out first run at the Chichester Festival Theatre, Taken at Midnight is settling in for eight weeks at the Theatre Royal Haymarket. The play follows the struggle of Irmgard Litten, played wonderfully by Penelope Wilton, who battled and bargained recklessly over the course of five years to attempt to secure her son Hans’s (played by Martin Hutson) release from the camps. The Litten’s is a tale mostly lost to history; Hans was among the political prisoners taken on the night of Reichstag fire for the crime of subpoenaing Hitler to appear in court as a witness in the Eden Dance Palace trial.

Written by Mark Hayhurst, the story is split between Hans’s experiences in the camps with fellow prisoners Erich Muhsam and Carl von Ossietzky (played by Pip Donaghy and Mike Grady respectfully) and Irmgard’s unrelenting struggle to free him. Much of Irmgard’s dealings are with SS Officer, Dr Conrad (John Light) and though the play does a good job of creating a deep, fierce bond between Irmgard and Hans, it is her interactions and strange relationship with Dr Conrad that are truly fascinating to watch.

Penelope, of course, outshines the rest of the cast with her fortitude and devotion but all round the performances are good. Hayhurst plays Litten with just the right balance of arrogance, defiance and vulnerability. Light portrays Conrad as a fairly well-rounded and helpful individual (although it is impossible to at all feel anything beyond animosity towards him) and the banter between Donaghy and Grady is top-notch.

Viewing the play on Holocaust Memorial day was particularly poignant and served as a reminder that before the Nazis began to invade other countries, it was their own people they dragged out of their homes in the dead of night, their own people they put to death. In short, Taken at Midnight is both a thoroughly enjoyable, well-written and well-performed play and an important tale that needs to be told.

Taken at Midnight is on at the Theatre Royal from 15th of January until 14th of March 2015, for further information or to book visit here.