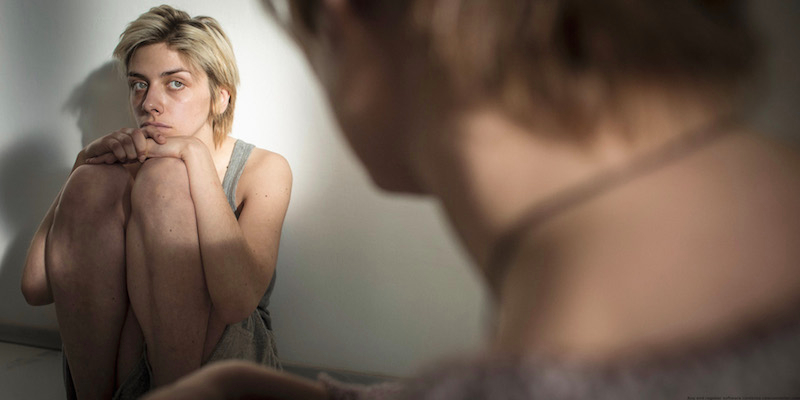 What was the initial trigger for Body?

I wanted to make a film about anorexics.I thought about it for a long time but then gave up this idea as I felt that this theme would be so hermetic and closed that it would not reach the audience. However, the plot about the plot about Olga’s character and the idea that a body has a lot of different meanings were still present in my mind. A body – physical, astral, dead – might be treated as an object, might be adored and hated. So this story has emerged from the material that the body is. Body features various approaches to our relationship with our body and our sensory experience of the world. Can you explain them?

Olga hates her body, which she sees as something useless. She wants to be free, to be void of its corporeality. She is a victim of this contemporary chase for an ideal body which in the end doesn’t exist at all. Her father doesn’t know how to help her. He sees dead bodies in his everyday life which in his pragmatic and lonely world become just objects. He doesn’t believe in anything. Anna, who believes in the disembodiment – or in other words in ghosts – attempts to convince him to believe. Each character is somehow trapped in his or her own body. He is old and embittered while Anna has in a way lost her sexuality. How has the Polish religious and political culture influenced the way you’ve treated this subject, especially for the character of the therapist?

The action takes place in present day Poland, although it looks a bit like it took place 20 years ago. And this is something I wanted to show. Just around the corner of new hip shops that sell organic food are people living the way they did back in the 90s. Poland of ordinary people is less «photogenic» and this is the Poland of these people that I’m showing, people who earn less than the national average salary working state jobs and are miles away from the hipster cafes in their neighbourhood. There are thousands of people like these. Today, 25 years after the collapse of communism, in a country where everything is constantly changing from one day to another, where Church no longer has such a strong impact on politics and state, people of a certain age feel simply lost.Anna searches for a meaning in her job. She treats the sick girls in a very emotional way and wants to implement new therapeutic methods, but Polish hospitals are not open nor ready for that. She is seen as a lunatic. Anna finds her faith in spiritualism, as Catholicism is for her an obsolete and untrue form. Why did you cast Maja Ostaszewska for the role of the therapist?

Maja is an outstanding theatre actress. Her portfolio includes many significant roles in cinema, but most importantly she frequently plays with Krzysztof Warlikowski, a very well-known Polish theatre director. Polish cinema doesn’t offer many role opportunities for women older than 40 years old as characters tend to be either bland or destined for women in their 20s. I dreamt about using Maja’s talent and creating a character that would allow her to use her experience. Together with Michal Englert we created this character of the therapist for her, being totally aware of the comedy skills that Maja has demonstrated in theatre. There is a sense of comedy and humor in this film despite the rather tragic reality and the fragility of the characters, how did you manage to lighten the tone?

Perhaps Michal, the co-writer of the script,and I are at this time in our lives when a too serious and snobby tone is just getting tiring to us. Despite its brutality, life tends to be quite funny even in the most violent moments. And maybe it is the case because without a good laugh it would be impossible to face all the things that happen to us. Serious subjects like faith for example. Such subjects would sound silly if they weren’t overcome with humour, even if it’s black humour. The human body is recurring theme in your films, what is it about it that fascinates you?

I’m fascinated by the body as a machine, which let our lives go. For me, to live – means also to create. Only an efficient body can allow us to do a great activities, to create, to move, to sleep and function. The body can impose terrible limits, it can become an obsession. To all intents and purposes everything might be related to the body. Thus, we search for something that is aside from it, we miss this thing that is outside of it.

Read our review of Body here.

Berlin Film Festival 2015: As We Were Dreaming | Review
45 Years: An interview with director Andrew Haigh