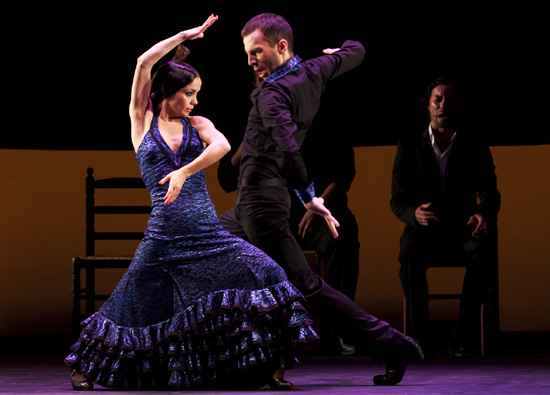 The opening night of the 12th Flamenco Festival London ended last night to raucous applause and a standing ovation. Flamenco has come a long way from its folk roots: it has moved from a fairly isolated movement in the poorer areas of Spain to a globally popular art form. The Flamenco Festival is a celebration of its ever-growing, ever-changing array of forms. The festival opens with Gala Flamenca, a dazzling performance by some of the world’s most talented flamenco dancers. The set-up is simple: a small group of musicians, three singers and (though there were supposed to be four) three main dancers. The show consists of ten dances, all breathtaking and toe-tappingly enjoyable. Some are fast-paced and lively, earning many an ole! from the crowd; others are slower, more thoughtful.

The lead dancers, Antonio Canales (choreographer of Nuevo Ballet Espanol and dancing the parts of young star Jesus Carmona as well as his own), Carlos Rodriguez and Karime Amaya, work together with the musicians seamlessly, creating a precise and tight performance. Canales’ performances in particular are enjoyable, especially in the place of Jesus Carmona in Trill A7 (Paso a dos) and Alegrias. His presence perhaps changes the meaning of the dances: no longer are they feats of youth, but more akin to the older generation’s attempt to reclaim and connect with their youth.

Karime Amaya’s performance is wonderful too, particularly in De Mujer, performed with Lucia Campillo and Carmen Coy in the traditional long dresses with skirts that would surely cause anyone but a dancer to trip and fall.

The show closes with Fin de Fiesta, a joint performance by all of the dancers, and the applause drags on so long that even the singers are coaxed into dancing. All in all the evening is a triumph of colour, music and dance, and hopefully has set the tone for the rest of the festival.