The House of Mirrors and Hearts at the Arcola Theatre 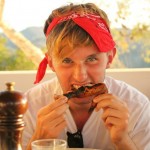 Mirrors – they reflect the reality and truth that faces them. The mirrors in the Keane household, though, are shattered; an unexplained incident has robbed the family of their father, and the discoveries of a new lodger threaten to uncover the secrets behind the episode. The result is a brilliantly chilling investigation into the hidden stories of a fractured home, punctuated by Eamonn O’Dwyer’s original music and songs.

O’Dwyer and Rod Gilbert’s chamber musical The House of Mirrors and Hearts has been in development for three years, and the time spent undoubtedly shows in its technical production. Impeccable synchronisation between the live band and on-stage actors brings complete focus onto the set: a sparsely filled kitchen and dining room with a bedroom up a flight of stairs. Several stage exits are possible, meaning members of the Keane family are constantly disappearing in opposite directions in a literal depiction of their tragic fragmentation. A claustrophobic lack of set movement is symptomatic of a slightly static storyline, even if this is reflective of the atmosphere of the house. This oppressive air, however, is eventually broken by a euphoric bottle-smashing scene set at a nearby pond, in which the audience intimately feels the relief of the characters.

The originality and pertinence of O’Dwyer’s music is impressive, and the frequent introduction of musical dialogue actually masks an occasionally stagnating script. Passing of Seven Years and Beauty in the Breaking combine biting harmonic clashes with naively sweet melodies, often pitting certain characters against each other with conflicting lines before moving into close harmony that is expertly controlled by every member of the cast. Gillian Kirkpatrick’s voice stands alone, though, and she leaves absolutely nothing behind in her swaying performance of Something for the Pain, her voice of seemingly limitless power inducing an impromptu round of applause.

The House of Mirrors and Hearts is on at the Arcola Theatre from 2nd July until 1st August, for further information or to book click here.

Watch the promotional video for The House of Mirrors and Hearts here:

House of Mirrors and Hearts