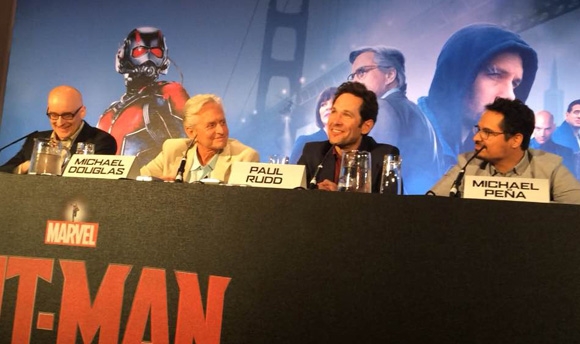 Did this movie give you all a newfound respect for ants?

Peyton Reed: I would like to think that I have always respected ants, but that level of respect has definitely increased throughout the movie. It is important also that no ants were harmed during the making of this movie, let’s get that out of the way.

Paul Rudd: In answer to your question, yes. Not trying to sound cute or anything, but even last week I was standing by the sink and some ants started walking towards the coffee maker and, maybe in an earlier time I would’ve just given them a little flick, but now I let them do what they want to do.

Peyton and Paul, the film had quite a protracted production history with Edgar Wright and Joe Cornish initially involved – could you talk about the changes you made to their script?

Peyton Reed: I think it is fair to say that none of us would be here, and there might not be an Ant-Man movie, if it weren’t for Edgar and Joe. The idea to make it a heist movie was all Edgar and Joe; the idea of Hank and Scott and mentor and pupil, again that was all theirs. Also, the idea of a third act where the battle between the good guy and the bad guy takes in a little girl’s bedroom, that was there from the beginning and I think that’s genius. The spirit of what Edgar and Joe created is still very much in the DNA of the movie.

When creating personalities for these characters, how much inspiration did you draw from the comics?

Paul Rudd: Well, the idea of Scott doing everything he does for his daughter is from the comics. But when writing the movie we tried to think of it as its own thing, although I like to think that if we weren’t being true to the characters that we would have been reigned back in.

Michael Douglas: Well, I was not a comic guy, or kid. They were kind enough to send me the script of Ant-Man along with a leather-bound copy of two years of Ant-Man comics, which I digested. So there was more backstory for Hank Pym than for any of the so-called reality movies that I might have done. So I had a pretty good blueprint to follow.

We know Peyton was a comic book aficionado growing up, but Paul, did you read comic books growing up?

Peyton Reed: Or did you have a real life?

Paul Rudd: Nope! I was a casual reader, primarily into The Hulk, but I read more English comics, actually. My aunt and uncle would send me these comics from here called The Beano and The Dandy, so I grew up with those characters and was into Roger the Dodger, and stuff like that. So I probably read more of those than Marvel comics.

Paul, could you tell us about how you prepared for the role physically?

Paul Rudd: I didn’t do anything fun for a year. I ate no carbs or sugar. I made health and fitness the focus of my life for a long time. I worked out with a trainer, and with a guy that taught me tumbling and flips and stuff like that. I was eating lots of protein and vegetables at specific times of the day. I didn’t drink any alcohol… and I was miserable to be around for about a year.

Peyton Reed: Would you just take your shirt off for us, Paul?

Peyton, does the heist movie sub-genre of Ant-Man indicate a trend in the Marvel universe going forward? And secondly you mentioned you like comics – can you tell us some of your favourite stories?

Peyton Reed: I don’t know if this signals a trend in Marvel’s movies, because I think they have always done sub-genres and this is what keeps the movies fresh. Look at last year, Captain America: The Winter Soldier was like a 70s political thriller, Guardians of the Galaxy – which came out in the same year – is a crazy, gonzo space-opera, and our movie has the structure of a comedic heist movie. In terms of the second question, I liked the original Avengers stories that involved Hank and Jan; the fact that they were an amazing superhero duo, but also the romance between those two characters was always fascinating. And also the fact that with Hank Pym there is always a little bit of schizophrenia and maybe an inferiority complex, because in the Avengers he was fighting alongside Thor and Hulk and he always felt inadequate. So, for me, those early years were great.

The Marvel movies always have quite a light touch, but Ant-Man in particular is extremely funny. Is Ant-Man going to stay lighter in tone, or will it go darker?

Peyton Reed: If we are fortunate enough to make another Ant-Man movie, I think there is a lot of story left to tell with these characters. There is also a freedom at Marvel to change the tone to fit the story best.

Paul Rudd: Ant-Man 2 will be like a Bergman film: very quiet.

Peyton Reed: Yeah, we’re going to shoot in Sweden and it’s going to be all about Scott’s silence.

MD: In acknowledgement of Angeline Lilly who is not with us today, as she is eight months pregnant, I think for those of you who stayed through the end credits, there is a little taste of what might be coming…

Watch the trailer for Ant-Man here: