Linda at the Jerwood Theatre Downstairs 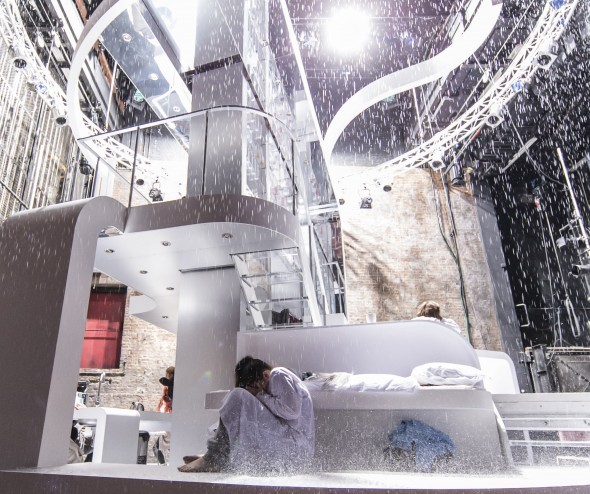 “I’m an award-winning business woman. I’m happily married with two beautiful daughters and I still fit in the same size ten dress suit I did 15 years ago. What could possibly threaten me?” So boasts Linda, the titular character in a new play by award-winning writer Penelope Skinner (of The Village Bike). As one might expect, this statement rather tempts fate.

Almost painfully relevant and with a gorgeous three-tiered, rotating stage providing the backdrop, Linda’s life slowly spirals out of her control. At work there’s Amy, younger, prettier and muscling in on Linda’s campaign, at home there’s daughter Alice who refuses to change out of a onesie, daughter Bridget who despairs over the lack of acting roles for women and husband Neil who’s somewhat sidetracked by Stevie, the singer in his band.

Not as clever nor as concise as some of Skinner’s other work, Linda nonetheless is a powerful play with an important and powerful message about the continuing plight of women, both as sexual objects and in the work place. The symbolism is a little on the nose and, at times, the dialogue drags and points are over explained; as such, the ending feels rather inevitable but, luckily, the strong performances save the show.

Lead actress Noma Dumezweni may only have stepped into Linda’s shoes ten days ago (replacing initial selling point, Kim Cattrall), but aside from a few minor slip ups, it’s barely noticeable. She draws out the best in the character – which unfortunately here and there feels a little like a caricature of the powerful woman – bringing out her vulnerability, making her more of a tragic character than she may have been otherwise.

But while Linda is far from perfect, Dumezweni’s performance (which is only set to get more impressive) and its heart-wrenchingly honest portrayal of the roles women are forced to assume in day-to-day life makes it a play not to be missed.

Linda is on at the Jerwood Theatre from 25th November 2015 until 9th January 2016, for further information or to book visit here.