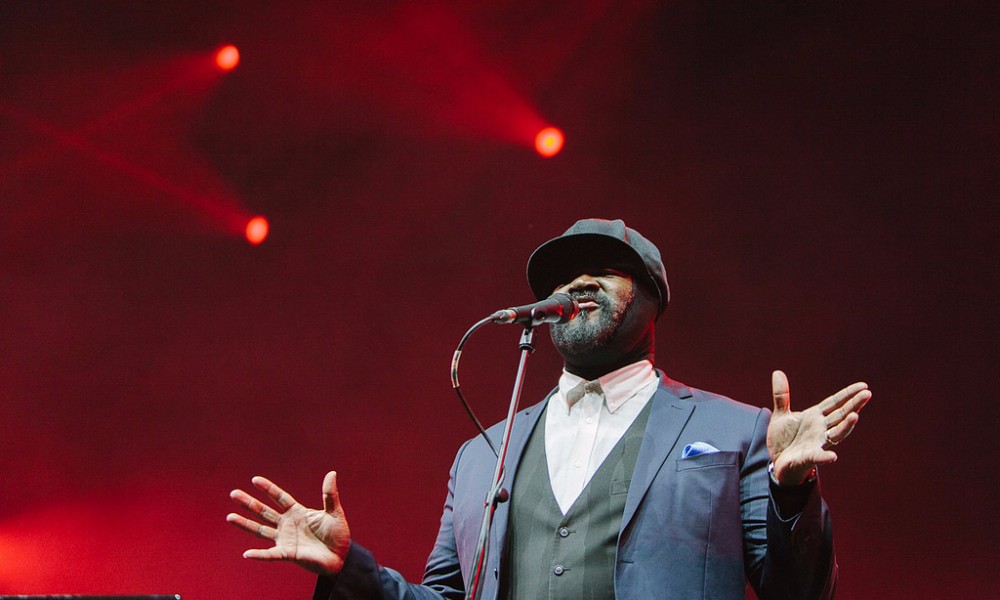 Hey Laura, Take Me to the Alley

Porter mesmerised his crowd as he crooned the soulful Holding On from his new album. He also introduced the benevolent, haunting ballad, Take Me to the Alley (“This is about the dark places, the lonely places…”), paying homage to the lonely and the down and out: ”Let them hear me say I am your friend…rest here in my arms…”.

The auditorium sang along to On My Way to Harlem, an upbeat, jazzy piece about the singer’s roots, with an amazing sax solo, and No Love Dying about saving a bird with a broken wing: “There will be no love dying here for me”. Musical Genocide was also welcomed with huge applause; the lively Liquid Spirit had everyone clapping, the arena filled with exhilarating energy.

1960 What?, about the Detroit riots and Martin Luther King’s death in the 1960s, was a powerfully performed piece with trumpet and saxophone: “There was a man, voice of the people. Standing on the balcony of the Lorraine Motel. Shots rang out, it was a gun. He was the only one to fall down…” Also included in the set were beautiful romantic ballad, Hey Laura, the gentle, bluesy Be Good, and a fantastic rendition of Papa Was a Rolling Stone, by the Temptations. The band excelled also, each instrument featuring a remarkable solo.

Gregory Porter’s mutual love affair with his fans infused the Royal Albert Hall with emotion. A woman cried out “I love you”, to which he responded “Thank you dear ones”. With ongoing audience interaction, he tenderly joked to a latecomer “You’re late, those socks are quite loud and red, but you look sharp”.

Gregory Porter’s lyrics are about benevolence toward victims of injustice, the unhappy, the forsaken. His message is about compassion. This was an uplifting, extraordinary show. Porter is without doubt the next great jazz vocalist of our time.

Hey Laura, Take Me to the Alley