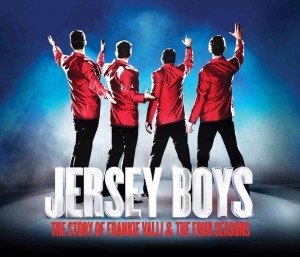 Over a decade has passed since the Broadway premiere of Jersey Boys, and the musical shows no sign of decline. On the contrary, its tours attract greater crowds each time. The show tells the story of singer Frankie Valli and The Four Seasons, the band who “put Jersey on the map”. Conceived by former member and songwriter Bob Gaudio, it is the result of extensive research and interviews with each surviving member of the band. The show relates their personal journey towards success and includes some of their greatest hits.

Musician Tommy DeVito puts together a performing trio, and soon notices the talent of a teenager named Frankie. As DeVito’s questionable lifestyle sees him pay regular visits to prison, Frankie has a chance to practice with the rest of the band and begins to attract attention. Another teenager, Joe Pesci (who goes on to become the world famous actor), plays the small but vital role of introducing the band to Bob Gaudio, whose lyrics were hitherto the only missing ingredient for achieving success.

Frankie, played by Dayle Hodge, wins the audience over with his impressive vocals as well as his ability to display the character’s sensitivity. The chemistry between the four protagonists is spot-on and each manages to give an accurate portrayal of the real-life musicians down to the nuances. The ultimate protagonist of the show is, of course, the music. The songs are performed with great passion and are smoothly integrated within the action. It’s impossible not to sway and sing along, which is proof of the musical’s success.

The plot is divided into four segments, each corresponding to a season and narrated by a different band member who offers his personal perspective. The changing seasons are announced on billboard-style signs coupled with pop art illustrations displayed on large screens. The main part of the set is a fixed metal structure framing the stage. It acts as a neutral background to jail cells, classy bars, seedy joints and TV studios. The bygone age of the 60s is honoured visually as well aurally.

This is a tribute that will awaken nostalgia for fans of the band and their popular songs, but it also serves to introduce The Four Seasons to new listeners and will undoubtedly continue to keep their legacy alive. Above all, it’s an exhilaratingly entertaining display of great talent. Between the swift and frequent scene changes, the snappy dialogues and the relentless succession of hits, there is never a dull moment in Jersey Boys.

Jersey Boys is on at the Piccadilly Theatre from 5th April until 23rd October 2016. Book your tickets here.