Arabian Nights: Volume One – The Restless One

Arabian Nights: Volume One – The Restless One | Movie review 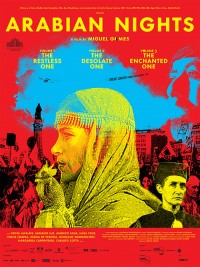 Arabian Nights: Volume One - The Restless One

After months of anticipation, Miguel Gomes’s trilogy is finally making it to the UK, to the delight of art-house film buffs and political activists alike.

The first instalment of Gomes’s trio paints a picture of a damaged Portugal, with the plot drawing from current events surrounding the economic crisis and the social agony felt by the country in 2013-14.

The structure of the three-part Arabian Nights is based on the One Thousand And One Nights collection of fantasy tales, in which the heroine, Scheherazade, tells stories to her bloodthirsty king husband, who weds young women, then kills them the next day. In an effort to stay alive, Scheherazade cleverly leaves her stories unfinished, buying herself another night to continue. Spoiler alert: 1001 nights go by and the king becomes attached, realising that he can neither kill her nor take another wife.

Although set centuries apart, the two sagas reflect a common theme: storytelling as a mechanism of survival throughout societies. In Gomes’s version, Scheherazade’s tales happen in modern-day Portugal, ripe with economic uncertainty and crippled under the austerity measures imposed upon it by Europe.

Christa Alfaite is enchanting as Scheherazade, who tells her murderous sultan husband fables so that she can live to see another day. We meet our protagonist on a boat, 25 minutes into the film. During the two-hour run, she spins tales of ego-driven politicians, political protests and the struggles of the working class, each creatively illustrated and dripping in satire, never allowing the audience to get bored.

Over the course of 15 months, Gomes travelled the country with his crew, collecting stories from news reports, collaborating with journalists and gathering accounts of locals, while shooting and writing the script along the way. This ambitious project has produced an imaginative, moving and surprisingly funny film that, like Scheherazade’s stories, leaves you looking forward to the next instalment.

Arabian Nights: Volume One – The Restless One is released on 22nd April 2016.

Watch the UK trailer for Arabian Nights: Volume One – The Restless One here:

Arabian Nights: Volume One - The Restless One

Louder Than Bombs | Movie review
Another World: Losing Our Children to Islamic State at the National Theatre | Theatre review